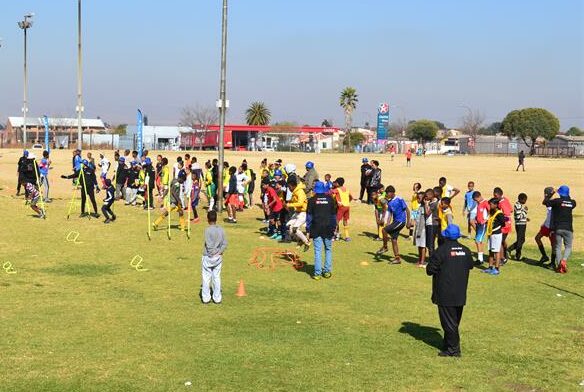 On July 15, the Eldorado Park Local Football Association (EPLFA), in conjunction with former PSL players, hosted a coaching session and training clinic for players on the pitch in Extension 6.

Boys and girls between the ages of 14 and 16 participated in the coaching clinic. It was hosted by former PSL players such as Fabian McCarthy, Matthew Booth, Jabulani Mendu, Joseph Makhanya, Aubrey Vilakazi, Jermaine Christian, Jamie Birds, Rene McCarthy and Edward Williams.

Former PSL players were invited to motivate children and involve them in playing football.

This clinic was to keep the children occupied with positivity and encourage them to work hard so that they would one day play professional football.

EPLFA’s newly elected President, Jerome Stevens, said: “It takes a community to raise a child and that’s what I want to be part of.

Eldorado Park football team coaches spent an hour gaining knowledge and tips on how to interact with children, talk to them and motivate them as they play and practice on the ground.

EPLFA Treasurer Lynn Lawrence spoke about the dangers of having children wandering the streets doing nothing, which often leads them to get involved in the wrong things.

EPLFA’s vision is to reduce the chances of children being involved in drug addiction, teenage pregnancy and any other type of problem.

The players engaged well with the kids while coaching them, and the kids were very welcoming to the session and did exactly as they were told while having fun and learning.

Booth said, “That’s where we have to do our job.

“This is where we have to roll up our sleeves and provide organized and safe football, coached by competent coaches.

“If we can do that, we can build a bigger pool of talent.

Get the latest news by visiting our other platforms: