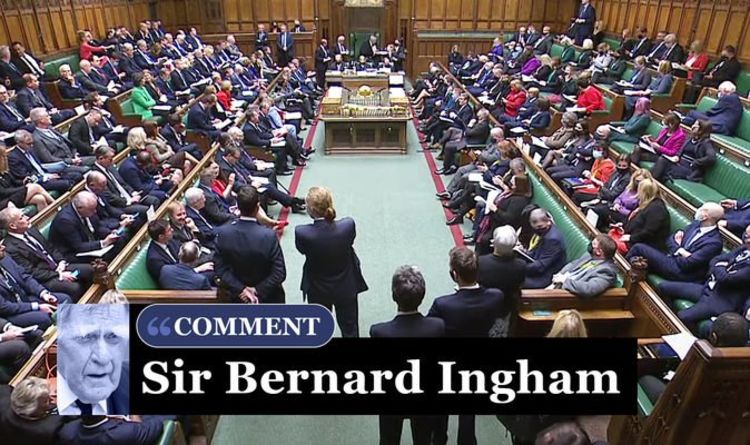 It is up to all of us to try to stop it. We can’t do that unless we try to figure out what brought us to this horrible pass that threatens our freedom under the law. This is my attempt to explain for my own satisfaction what is going on in our stressed society. I write as someone who has lived with terrorism for over 11 years as Margaret Thatcher’s press secretary.

During that decade she lost her close colleagues Airey Neave and Ian Gow to the IRA and she herself was fortunate enough to escape when they bombed the party’s conference hotel in Brighton.

They failed to wipe out the Cabinet, but they murdered five Tories, including Sir Anthony Berry, deputy chief whip.

John Wakeham, Chief Whip, and Norman Tebbit, Industry Secretary, were injured, and Ms Wakeham was killed and Ms Tebbit was crippled for life.

Along with several other officials, I received a letter bomb that my wife, a former police officer, identified as suspicious and put it in the garden before alerting the police.

All of this, if not predictable, could be expected from a known enemy of the state.

Today, life – and sadly death – has evolved. One enemy, militant Islam, may be known, but its adherents may well be independent operators among us awaiting their opportunity to kill.

This, I suppose, makes the job of the security services much more difficult. Who, for example, has been radicalized – and by what cause – and who among them represents an immediate danger to life and physical integrity?

This is where we, ordinary citizens, can play our part in alerting the authorities to suspicious behavior.

Unfortunately, it’s even more complicated than that these days.

This is because, apart from religious fanaticism, we live in an intolerant society which expresses its intolerance in violent terms.

How did we get to this miserable state? Well, we first saw a marked decline in the Christian faith which speaks of love and not war.

Worse yet, the ecclesiastical authorities try to be “with her” instead of preaching the faith and bowing to the demands of the intolerant and immoderate Wokerati.

In short, our society has lost one of its stabilizers.

He did so to such an extent that the crucial task of raising children became lax – in fact, often overlooked.

Talking about “spare the stick and spoil the child” designates you as Neandearthal.

What children must admire when social discourse has become debased and magnified beyond belief. Bad language is routine, even among politicians who should be better informed.

At the same time, it seems to me from the television commercials that the average film producer is in the business of violence while the anti-social media not only dumps their bile and threats to kill, but distributes every minute the corruption of innocent people.

Is it any wonder that with the nation – especially young and middle-aged people – so glued to their cellphones that they seem dangerously oblivious to their surroundings – things are going downhill?

Which brings me back to the wokerati who seem to spend their days looking for something to be offended.

They may not yet be a unique or inherently violent movement, their moans are so diverse, but they have already captured our institutions to enforce their will when it comes to race, relics, and ties to former colonialism (not la new Chinese variety) and the seemingly endless variety of genera, regardless of biology.

They do not hesitate to silence – “cancel” – those who do not kneel before their prejudices – even to end their careers.

Our universities are in the grip of this totalitarianism.

Awakening can of course be the object of some of the most balanced mockery in society, but what does it teach naturally rebellious youth?

Well all you have to do is scream and yell and threaten and the world can be yours.

Behind all this hides the hard left which carries to the nation a visceral hatred of political opponents as expressed by Angela Rayner, vice-president of the Labor Party, with her dismissal of the “conservative scum”.

It’s so deep that even moderate Labor MPs are reluctant to attend their party’s conference.

The moderate majority of Britain shakes their heads at the kind of country we have become, but feels quite helpless in the face of it.

But they are not without weapons. By all means, ridicule the seemingly endless nonsense produced by the wokerati while acknowledging that, if left unchecked, it could lead to violence.

Denounce violence at all times and demand, with ever more insistence, actions to contain it. Campaign for more discipline and responsibility in society.

And above all to preserve the right of our elected officials not only to go about their legitimate occupations in complete safety, but to demonstrate that freedom of thought and expression in non-threatening terms is at the root of civilized British values.