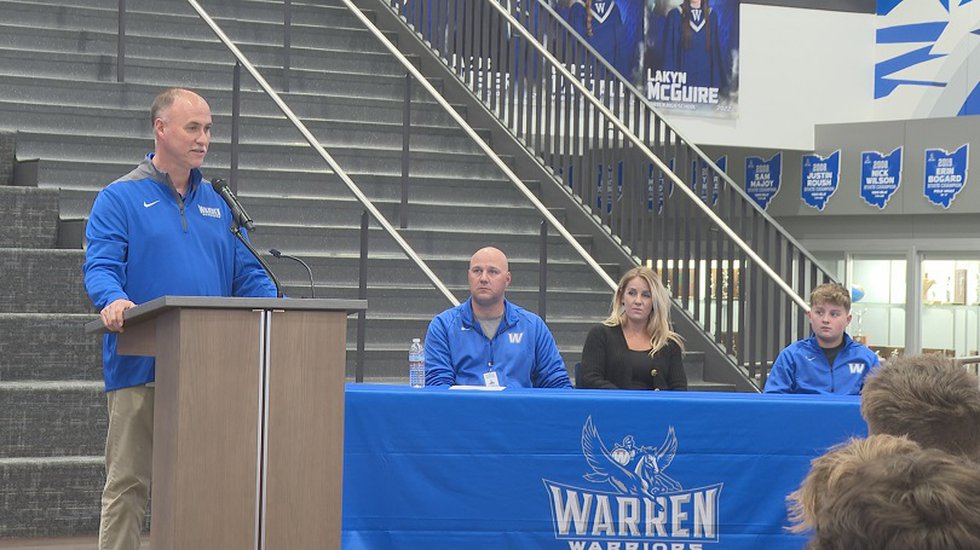 The Warren Local Schools Board approved the hiring of two head coaches at Monday’s meeting.

On Tuesday, the two new coaches were introduced to students and Warren fans.

Jimmy Peyton will take over the Warrior football program as the new head coach, while Brad Venham has been promoted to take charge of Warren’s women’s basketball team.

Peyton travels to Warren from Ashland, Kentucky, where he was last offensive coordinator for Ashland Paul Blazer High School. As a former quarterback, Peyton has offensive experience, something the Warriors will look to be known for this coming season.

“We’re going to work on our core values ​​which are effort, attitude, accountability, structure and discipline,” Peyton said. “It’s something I won’t deviate from. I live these values, I preach them everyday, I will hold kids accountable to them. I want to create a highly competitive culture and atmosphere where these kids love to come every day and compete. It’s been a dream of mine since I was a kid to be the head football coach at Ohio State, and to be one in Southeast Ohio Division IV is literally like a dream come true.

Brad Venham served as an assistant for the Warren High School boys’ and girls’ basketball teams. He takes over after Amy Way announced her retirement after 11 seasons with the Warriors program. As Warren’s former student athlete, he knew he couldn’t pass up this opportunity.

Lie that Manju used to come drunk: audio of a lawyer who allegedly coached Dileep’s brother