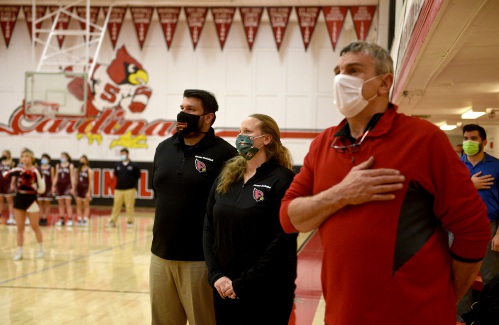 CLAREMONT – Steve Condon used to play the nice assistant on the bench – the person players talk to during games if they don’t want to talk to the head coach.

But this year he’s the head coach, with his wife, Ivy, moving on to the assistant role.

Ivy Condon, who had led the Stevens High girls’ basketball team for the previous eight years, gave birth to the couple’s first child, a daughter named Monroe, on August 24. The Condons are therefore changing jobs this season to give Ivy more time. at home to take care of the baby.

Steve had been JV’s head coach and an assistant to the varsity team, but the Cardinals’ 64-7 win over InterLakes on December 10 was his first game in charge of the varsity team.

“It was a very difficult decision,” he said. â€œWe did it together as a family. I am very grateful for the opportunity and delighted to step foot in the coaching world.

Steve and Ivy were both born and raised in Claremont and graduated from Stevens. Ivy’s father, Carl Desilets, was the university’s head coach until 2012. Ross Dole, who now coaches at Newport, succeeded him before Ivy took over in 2014, and Steve is by his side ever since.

Desilets remained involved in the program, first as a coach at Claremont Middle School and now he replaces Steve as JV coach. Ivy’s sister, Shea Desilets, took their father’s place on the college team.

Ivy found out she was pregnant last December and told the team about it towards the end of the season. Stevens was limited to just five regular season games due to COVID-19 before losing in the second round of the NHIAA Division III playoffs to Fall Mountain. She still intended to be a head coach this year after 12 weeks of maternity leave, but when Monroe struggled to grab a bottle, Ivy decided to take on a more limited role.

â€œI coached this summer, until the day before I left (Monroe),â€ she said. â€œGames at one and a half, two hours, I knew that was not going to be realistic for me. I could have said that I would stay and coach every game at home and close, but I wanted to be fair to the girls and I wanted there to be consistency.

Steve said the transition was easy due to his familiarity with the team. The Cardinals only had one senior last year, so the squad is almost intact as they try to build on their playoff appearance from a season ago.

Ivy Condon said the pair have complementary training styles – she is fascinated by defense while Steve is more interested in offense.

â€œIvy let her assistants have a lot to say during games and during practice, and she listened to their comments,â€ said athletic director Doug BeauprÃ©. “Steve is already someone who knows the strengths and weaknesses of the players, so things have gone really well.”

Stevens will count on seniors Molly Derosier, Jenna Bonneau and Zahna Rice this season, said Steve Condon, but it was the younger Cardinals who led the way in their season opener. Junior Alyssa Paquette led Stevens with 14 points, sophomore Kiley Bundy had 10 and junior Joar Figal, a Spanish exchange student, added 11. InterLakes did not score any points in the first half.

Many players know the two coaches long before high school, having played with the Claremont Lady Hornets, the AAU team the Condons created.

â€œA lot of junior and senior girls were now our first group,â€ said Steve Condon. â€œIt’s fun to see the circle come full circle. It’s definitely a benefit to come in and already have connections and an understanding of where we’ve been and where we hope to be.

Rice attended college in Newport but joined Stevens JV’s team in eighth grade and has been in college since grade one. She said the team have learned different games this season to set up more outside shots, but overall not much has changed.

â€œHaving them both in the program certainly helps all of the players individually,â€ Rice said. “We’ve all had Steve or Ivy or Ivy’s dad, so we have the whole family with us.”

Ivy Condon will still be in practice and most games, only staying home for long trips. She said several players received gifts for Monroe over the summer and the team handled the transition well. Depending on Monroe’s mood, the baby will be a frequent presence behind the Cardinals’ bench.

The Condons have yet to decide whether Ivy will return to the head coach position next year, but she made sure to point out to the team that Steve is in charge this year.

â€œIt’s the fine line of making sure we explained to the girls that Steve is the head coach and what he says goes,â€ Ivy said. “It’s certainly not easy being a head coach in the past, but it’s a different perspective to be able to sit down and watch sometimes.”

students from the West of Lyon gain teaching experience | News