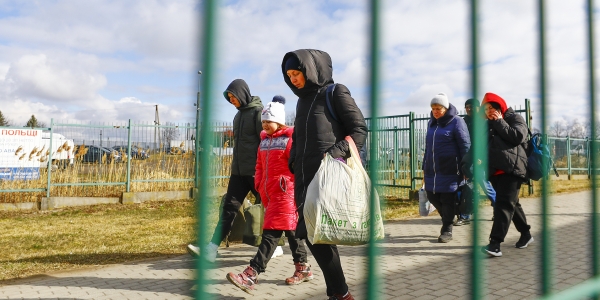 Ukraine: fleeing a war zone but continuing to teach

Rachel Lehmann-Ware, Grade 6 teacher and whole-school science coordinator at the Ukrainian British School (BISU) in Kyiv, had spent the first weekend of the Russian invasion of Ukraine under curfew on his school campus: “He has a good basement,” she notes.

But this first Monday of the war [28 February]the decision was made to leave the city and go as far west as possible.

The plan was to drive, but it soon became clear that was not possible: “We were told‘It’s too dangerous – the Russians have targeted the roads'”.

The alternative was therefore a train – which left in thirty minutes: “It was literally about grabbing everything and running to the parking lot and then [our driver] screaming in the streets all the way to Kiev to take us to the station.”

From there it was an 18 hour train journey – “on one of those really, really old Soviet-era trains” – across Ukraine to a town on the Romanian border, which, for now at least, is his homeland.

The fate of local staff

Many other international staff and their families have undertaken similar escapes – to Greece, Germany, Kenya, Poland and more. But for many at the school, leaving is not an option – especially for local male staff, who, if aged between 18 and 60, must stay on to fight in the military.

Lehmann-Ware says she knows many staff members had left to enroll by the time their school obligations ended.

“I know for a fact that some of our security guards, who were protecting us, had to go enlist in the army after dropping us off. Whether we see them again or not…”

She continues: “My greatest hope, and I know one of David [Cole, principal of BISU] and my husband Duncan [a science teacher and assistant head of secondary at the school] the greatest hope is that one day we will have the opportunity to thank them and give them a hug.”

For female staff, the option of escape is possible, however, and Lehmann-Ware says finding out that a local teacher has managed to leave the country has been a huge relief.

“I just found out today [4 March] that one of my assistant professors, whom I hadn’t heard from since Friday and whom I was completely freaking out about, arrived in Warsaw, which is incredible.”

Unfortunately, many more remain trapped in the country.

The plight of these local BISU employees – and its sister school in Dnipro – is being raised in powerful places, with MP Liz Saville Roberts raising the issues in the House of Commons when she asked Boris Johnson to expand the refugee scheme to give them safe access to the country.

“173 Ukrainian colleagues from this school are stranded in Kyiv and Dnipro, and ineligible for the Interior Ministry’s humanitarian sponsorship route because the school is domiciled in Ukraine,” she said. “Our Irish neighbors waived all visa requirements for three years. Why is the Prime Minister not allowing us to offer the same humanitarian welcome?”

BISU is also a Council of British International Schools (COBIS) Member school and COBIS CEO Colin Bell has written to the Prime Minister asking him to do more to help local school staff get safe passage.

In the letter, seen by YourBell writes: “COBIS is very concerned about the 700 children enrolled in the school and about the staff, not just the British nationals who have a safe haven, but the many Ukrainian employees of this British school who may now be in need of asylum. and a place of safety – in their obvious ‘home’, the UK.

“Therefore, with regard to the UK Government’s humanitarian pathway, can you please give assurances that no barriers will be put in their way of entering the UK.”

No action on this appears imminent – but Lehmann-Ware says the fact that it was raised in the Commons was a “powerful” moment for the staff.

“I messaged some of our Ukrainian staff and they were amazed by this – that our school would go this far and push for them – some of them were in disbelief.”

Across Europe, however, the international school community has stepped in to help those fleeing the situation.

A being Frankfurt International School, where Dr. Paul Fochtman, director of the school, said he hosted three students from Kyiv – and two from Moscow – who had left their international schools.

The British school in Bucharest has also offered to house BISU staff with a Ukrainian teaching assistant and her 11-year-old son already ready to receive help.

Meanwhile, Liz Free, CEO and director of the International School Rheintal (ISR) in Switzerland, says her school is also looking to do what it can, such as creating possible scholarships for displaced students. attend school.

She is also helping by preparing to welcome a Ukrainian teacher, her two adult children and her 16-year-old son to stay with them at her family home later this week.

“It’s a chaotic and desperate situation for people – so anything we can do to help the international school community is vital.”

Ensuring normality as best as possible

However, while many students are now navigating new schools, for many more at BISU, school life continues as best it can.

This, she says, is essential: “We continue to provide an excellent level of education for these children, and that is what we are doing. This normality…it is essential in times like these. “

Of course, that has meant returning to distance learning and – in ways no one could have predicted – has meant that much of the learning from the pandemic has come back into full effect.

“Students are used to learning online from the pandemic, which in a way even brings a kind of normalcy to what they know. Now, of course, there’s the added component of an ongoing war.”

All of this means assignments are set, assemblies are hosted online and work is presented, exams are studied and standards are met.

“One of my kids didn’t have his camera on, which is our rule,” Lehmann-Ware recalled of an online lesson.

“And the other teacher who replaced me said, ‘Put on your camera.’ And you just heard, ‘Mom…Miss Rachel is here…my uniform!’ and he just appeared with his shirt here [she gestures a shirt askew and hurriedly being put on]his tie in his mouth and saying ‘Oh my God, I’m not dressed’.”

“And I said, ‘You’re fine for today but next time you better have it!'”

Lehmann-Ware is quick to add that the rules are not enforced to the point where there is a lack of appreciation or empathy for the reality these children face, but, again, he is about creating a sense that school is a solid continuation in their lives.

“We know that some children had to flee and they did not take the uniform […] but once they’re settled, it’s a matter of telling them “get yourself a little white button-up shirt, get yourself a little tie, it can be blue and yellow”. Again, it’s about that normalcy of having to put on a uniform.”

A welcome respite but no escape from reality

It seems to have the desired effect with students all showing up and getting the job done and lots of discussion and engagement across classes and assemblies, says Lehmann-Ware — and parents appreciated that, too.

“The school community is very grateful to us for being able to provide this…that there is now a complete virtual school, from early childhood through to completion,” she says.

“I even got an email from a parent saying, ‘I’m so sorry, [my child] is not going to be online learning today, we are still traveling”. For a parent to know that education is still being provided and that they don’t want their child to miss out on it, that’s fantastic.”

Yet despite all this push for normality, Lehmann-Ware admits there have been sobering reminders that what staff, parents and children at the school have experienced is something truly terrifying.

“I think one of the things that really made me realize was that when I joined an online lesson for the first time since last Thursday, with some of my students that I normally would, one of my daughters said to me, ‘Miss Rachel, you are there. We did not see you, we were so afraid that you had been killed”.

“She’s a 10-year-old girl. What 10-year-old should have that as a concern – that he hadn’t seen the teacher and thought his teacher might have been killed.”

It’s a story that goes to the heart of the human tragedy unfolding in Ukraine – and why the efforts of BISU staff, to do all they can for their community, are so powerful, because, for these children and their parents, what they experienced was something almost unthinkable just a few weeks ago.

‘We will be back’

For Lehmann-Ware, an Australian who has previously worked at international schools in El Salvador and Qatar, the situation has caused her and her husband to take stock and finally seek to return home.

“We are finally going back to Australia for the first time in three years due to Covid.”

That doesn’t mean she’s giving up work or school, though: “We’re going to do some e-learning – the jet lag will be interesting… I think it’ll be midnight to 7 a.m. , but never mind, it’s okay, we’ll do it.”

Additionally, she says that she, her husband, and all of the other BISU staff are already envisioning a time when — not if — they can return to the country, city, and school and do whatever is necessary to help Ukraine.

“We all agree that when all this is over and whatever the state of Ukraine is, we will all come back and we will rebuild this country and, if necessary, rebuild the school,” he said. she stated.

“Even if that means we’re there to help build it brick by brick, we’ll be there as part of that process of rebuilding the building – we’re all very committed to doing that.”

Get the biggest education stories of the week straight to your inbox every Friday with the Your journal newsletter. Simply log in or create a free Tes profilethen visit your preference center and check the ‘newsletter magazine’ option

What Happens When Auto Finance Falls Through