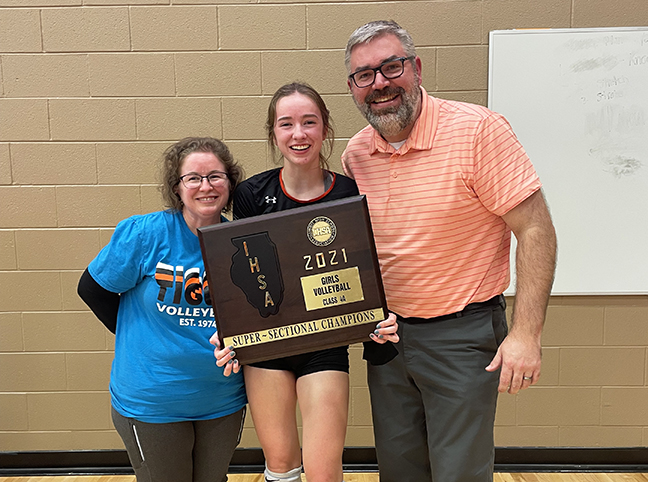 Transitions from Vieth to teaching, coaching

GLEN CARBON — Paul Vieth has taken another step to follow in the path of his former teachers and coaches at Edwardsville High School.

A 1996 EHS graduate, Vieth was a standout offensive lineman for the 1995 EHS football team, which went 11-1 and reached the Class 5A quarterfinals. He then played at Illinois State University.

Vieth is now in his third year coaching girls’ and boys’ volleyball at Father McGivney High School. In 2021, he left a 25-year career in retail management to become a full-time math teacher and coach at FMCHS.

“I always wanted to be a teacher and my whole family apart from my dad who was a barber has been in the education business,” said Vieth, 43, who recently quit as a women’s volleyball player. coach, but will continue to coach the boys. “My mother has a doctorate in education and worked in an early childhood center and my sister worked for her.

“My brother (Dave Vieth) is an assistant principal at Mattoon High School and he’s a former baseball coach in Nashville and Valmeyer. In college, I changed my major from business to education, but I knew that there wasn’t a lot of money in education, and I ended up going into retail.I don’t regret it, but education has always been my passion.

Vieth, who was an inventory control manager for RP Lumber Company, planned his career change at the start of the COVID-19 pandemic when he started taking online classes at the University of Phoenix. He is preparing a master’s degree in secondary education.

He made the transition from retail to teaching at the start of the 2021-22 school year at Father McGivney.

“If I wasn’t able to teach full-time, I’d probably be doing a lot of supply right now,” said Vieth, who is due to get her master’s degree in August. “I can walk into the classroom and get real experience and enjoy my time at Father McGivney.

Every Wednesday, the Edwardsville Intelligencer will publish a “Where Are They Now?” story of former Edwardsville High School or Metro-East Lutheran student-athletes. If there is a former student-athlete you would like to know, please email Scott Marion at [email protected]

“I was there during his freshman year and I remember being in the classroom when we met him,” Vieth said. “He explained that this group of freshmen was going to be the first group he would have for the four years.

“It was amazing to see how it came to fruition and we ended up being the team that we were. It brings back a lot of great memories for me.”

“I think it has a lot to do with what we did before this season, including my freshman year in 1995 when we had the teachers’ strike (which forced the Tigers to give up their first two games)” , said Vieth. “I shout out to a lot of upperclassmen because we went to their house and bonded a lot.

“It’s made football so much more important. When something you care about so much is taken away from you for a short time, it sharpens your focus. The coaching staff, with Coach Dougherty and all his assistants, were on the same wavelength and delivered the same message. It was a combination of great players with a lot of heart, restlessness and desire.

In the Class 5A quarterfinals, East St. Louis scored the game-winning touchdown with 17 seconds to beat EHS 32-26.

In the second half, EHS quarterback Jimmie Dougherty broke his ankle, initially diagnosed as a sprained ankle. He entered the game in the fourth quarter to score the extra point to tie the game.

“It was a game that they could probably make a movie out of,” Vieth said. “You start with the weather and the ice cover on the pitch and all the back and forth of the game. You had Jimmie kicking extra with a broken foot and Ryan Jumper coming in at QB (for Dougherty) and doing a great job.

“We had guys who stepped up and made plays when they needed to. It was a tough game and we left everything on the pitch, but we couldn’t get the win.

Vieth’s success on the offensive and defensive lines at EHS was enough to earn him a scholarship to Illinois State, where he played for three seasons.

“The ISU was kind of the perfect storm for me,” Vieth said. “I visited a few other schools like Eastern Illinois and Indiana State, but got a phone call one morning from Coach Dougherty, who told me an ISU coach was there. and they wanted me to come see a movie with them.

“We were watching a video of a play where he was impressed that I was on the opposite side on the defensive line and taking a chasing angle to chase the running back. It was one of those plays where I tell kids that you never know when it’s going to happen or what’s going to be filmed. That’s why you give 100% all the time and it’s a game that impressed that coach and that helped me get the ball rolling.

In his junior year at ISU, Vieth had a starting job on the offensive line at left guard, but at the end of the season he had to hang up his cleats for medical reasons.

Vieth transferred to SIUE, where he earned a bachelor’s degree in business administration with a major in marketing.

He then embarked on a career in retail management, working 10 years for Home Depots in Alton, Edwardsville and O’Fallon, Missouri, before spending 14 years at RP Lumber.

While Vieth had already spent two years at Father McGivney coaching girls and boys volleyball, it still took him a while to make the transition from retail management to teacher and coach. full-time coach.

“Anytime you change professions, there will be an adjustment period,” Vieth said. “Fortunately, my family and lots of friends being in education were able to help me if I had any questions.”

Vieth got into volleyball when his daughter, Madison, now a senior at EHS, started playing the sport at a young age.

“I was inspired by dads who went out and helped with the Little Tigers (football) program and I always thought that if you’re going to teach, make sure you know you’re teaching the right way,” Vieth said. . .

“I got involved in volunteering with the Glen-Ed Volleyball Clinics, run by Doug and Brenda Saye, and then got involved in the H2 club program. I coached with H2 for a few seasons and then my daughter started playing for the Illinois team for HP in St. Louis.

The FMCHS women’s volleyball program, meanwhile, began at the junior varsity level in 2015, while the boys completed their first varsity season in 2019.

Amanda Dreyer, who compiled a 42-44 college record in three seasons, including a 25-win season and the program’s first-ever regional and section titles in 2018, resigned as coach after the school year. 2018-19.

Vieth learned of the opening via email and felt the opportunity was too good to pass up.

“I take all the lessons I learned from my football coaches and try to pass them on to a new generation,” Vieth said. “With the girls, you take a slightly different approach, but they want to learn the same lessons.

“I also coach the boys at McGivney and our next season is coming up in March, so I’m excited about that. They’re different sports and different techniques, of course, but it’s always about involving the kids and teaching them the value of dedication and what makes a team successful.

Vieth considers one of his greatest accomplishments to be the establishment of the Edwardsville City Youth Sand Volleyball Summer League.

“I approached the city four years ago and helped them create a kids’ sand program at Winston Brown Sand Courts for kids in middle school through high school,” Vieth said. “We have grown to over 300 children who are now participating in the program.”

Vieth and his wife, Heather, live in Edwardsville, and Madison is their only child.

In addition to his full-time duties at FMCHS, Vieth does woodworking and has a side business called Vieth’s Custom Furniture.

His current coaching schedule leaves him with less time to devote to this part of his life, but that suits Vieth, who relies on his football experiences at EHS to teach his current athletes.

“Edwardsville has always been an influence on me and I love the city,” Vieth said. “I love seeing my former coaches come out and can’t wait for Tim Dougherty to enter the EHS Hall of Fame (in February). I was asked to contribute to his intro video and it was cool for me because that Coach Dougherty had a big impact on my life.

“I am honored to have been part of his program and will be there to see him inducted. His son Jimmie walks in at the same time, which makes him even more special.