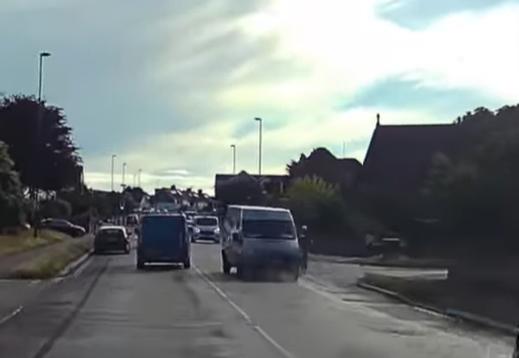 Neal, the son of European Cup-winning full-back Phil Neal (but don’t mention football!), regularly posts videos on his website and YouTube channel, which has over 109,000 subscribers, saying his experiences as driver and instructor in the North West of England.

Although he has often been praised for his level-headed and unbiased approach to cyclists on the roads, earlier this year one of his videos, titled “Cycling 2 Abreast and Overtaking”, caused a stir after some viewers claimed that Neal criticized the cyclists in the clip for riding in pairs before “unnecessarily” honking their horns as they passed.

In May, he criticized the divisive approach to road safety taken by Cycling Mikey, another live blog favorite (we just need Jeremy Vine to appear and we’re good to go), who Neal says drives in made to more incidents of road rage.

In one of his latest YouTube videos, Neal, who runs his own driving school business, slams a van driver who appears to be deliberately swerving towards a cyclist.

“Without a doubt it was done as a form of punishment,” he recounts in the clip, which was captured last week.

Neal then says that – although it’s hard to say for sure – he believes a young child could be sitting in the passenger seat of the van.

“Is this child learning that this is the right way to deal with a vulnerable road user?” he keeps on. “I sure hope not.”

“And if that’s the case, that there was a child in that passenger seat, I would just like to ask the driver this question: ‘How would you feel if someone did that to your boy?'”

> “I strongly disagree with his approach” – Ashley Neal, YouTube driving instructor, on CyclingMikey

Neal’s followers agreed with his take on the incident, with one commenter describing the maneuver as “threatening with a deadly weapon is what it is, and it should be charged and prosecuted as such.”

Another wrote: ‘This needs to be reported to the police and the video sent to the company. Seriously. Accidents and mistakes are one thing… quite another. Even if the van didn’t make contact, it could have caused the cyclist to pinch a curb or drain and end up under the wheels of a following vehicle…or possibly drive up a curb and hit a pedestrian.

“It doesn’t matter if there was an altercation or words exchanged later…maybe a tight pass caused the cyclist to bang into the side of the van.

“It’s okay, there’s no excuse for that.”

“The general problem with much of society today,” summed up one viewer, “is that they aren’t taught ‘how would you like this to happen to you?’ or of course “happened to your beloved/child/whoever” then you get dumb assholes like the van driver who thinks it’s perfectly fine to behave like that.

Another user noted the potentially secondary nature of anti-cycling attitudes.

They wrote: “I took some friends of my daughters to a birthday party the other day, and as we approached a cyclist, one of them said ‘urgh, I HATE them cyclists, crush them! “, to which my daughter replied “Why? My father is a cyclist.

“I told him that cyclists don’t hold cars back, I said that even if we ride slowly behind him waiting for a safe place to pass, we will catch up with the traffic at the next junction and it won’t cost us time. Then underlined when we did!”