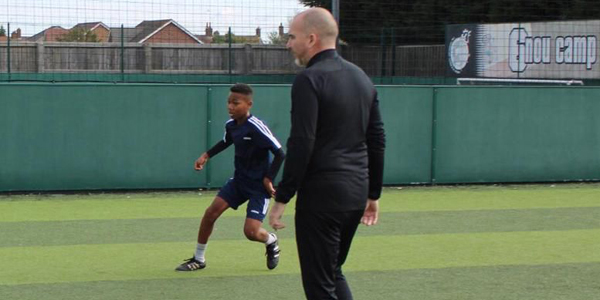 Peter Rickards has dedicated almost 20 years to the training and development of young Bermudian footballers.

Junior coaches rarely receive the same recognition and praise as their senior counterparts.

And yet, Rickards is one of a handful of Bermudians coaching overseas after recently accepting a position with the Sports and Education Trust program at Sky Bet League One club MK Dons.

“I was working at BELCO about 20 years ago when a friend asked me if I could help him run his youth program,” Rickards told Bernews. “I went to lend a hand and found a passion for it. I’ve been doing it ever since.

“Never in my wildest dreams would I have imagined that I would end up working at a professional club, living in England.”

After cutting his teeth as an assistant coach in the youth programs of Paget Titans, Devonshire Cougars and BAA, Rickards immersed himself in futsal – a small indoor football game that uses a heavier ball to help improve skills and close control.

He was captivated by the game’s specific techniques and tactics and believed he could “offer something different” to homegrown players fed a strict diet of conventional football.

“I always felt I was missing something in terms of youth development,” said Rickards, who now lives in Northampton in the East Midlands. “I discovered futsal when a friend visited the island, a Brazilian living in the United States.

“He showed me things and we organized a clinic for our young players. I was blown away and could see the clear benefits for youth development. I then changed direction and interest.

“We entered our teams every summer for the World Futsal Championships,” Rickards said. “It opened my eyes to the level we needed to achieve, especially when we played against Brazilian teams. It’s absolute religion there, and the technical skills of the players develop so much faster.

“We still have the futsal academy in Bermuda, but due to the Covid situation we cannot operate it as often as we would like.”

After moving to England due to his son’s schooling, Rickards formed CP Sports Group, an auxiliary arm of CP Athletic Development, which assists Bermudian players and their families seeking education and football opportunities in the stranger.

The group helped place six Bermudian students in schools in England and Spain.

“A lot of parents and young players are looking for schools with a good level of education with a football component,” said Rickard, who runs CP Sports Group with his wife, Felicia.

“We interview the child and their parents to get a good idea of ​​what they are looking for in terms of the level of education and the level of football they want. They don’t have to worry about going on Internet and search and choose something based on what they find.

“We also provide guardianship, so if parents don’t want to incur the cost of bringing their child back to Bermuda or risk Covid, their child can stay with us.

“We are fully vetted guardians and have completed all background checks, DBS checks and child safety courses.”

Helping the island’s footballing talents has become a calling for Rickards, who also uses his connections in England to set up trials for young Bermudians.

Among those he has helped are Matthew Moreno, a Bermuda Under-20 defender who is on trial at MK Dons, and Jasmine Spence, a Wales Under-23 midfielder who has recently signed for third tier team MK Dons Women.

Rickards mainly coaches the under-11 team of the MK Dons Sports Education Trust programme, although he has gained experience in training players up to under-18 level since he started his role in September.

“The Sports Education Trust program is a step outside of the academy,” the 51-year-old said. “He does a lot of community work at grassroots level and provides a high standard of training for players looking to enter the academy.

“It’s a great opportunity. There’s also a futsal program, so maybe I’ll get involved at some point. I’m just patient and always find my way.

Rickard said he is keeping in touch with fellow England-based Bermudian coaches Dennis Zuill and Dashun Cooper and believes there are life-changing opportunities for those wishing to continue coaching overseas.

Zuill, a former Bermuda defender, works for Sky Blues in the Community Scheme – the charity arm of Coventry City, Championship side Sky Bet; Cooper, a former X-Roads goalkeeper, is in charge of goalkeeping at the International Development Academy in Reading.

“Dennis lives relatively close and we talk to each other from time to time. Dashun came through our futsal program. He came to see the MK Dons setup and I encouraged him to move to the UK.

“The biggest challenge for local coaches is that you won’t make money at Bermuda level in the UK, so you have to have a passion for it; It’s necessary to work hard. It’s rewarding, though; the people you meet, the facilities you work in and the quality of the players you coach. The benefits far outweigh the challenges.