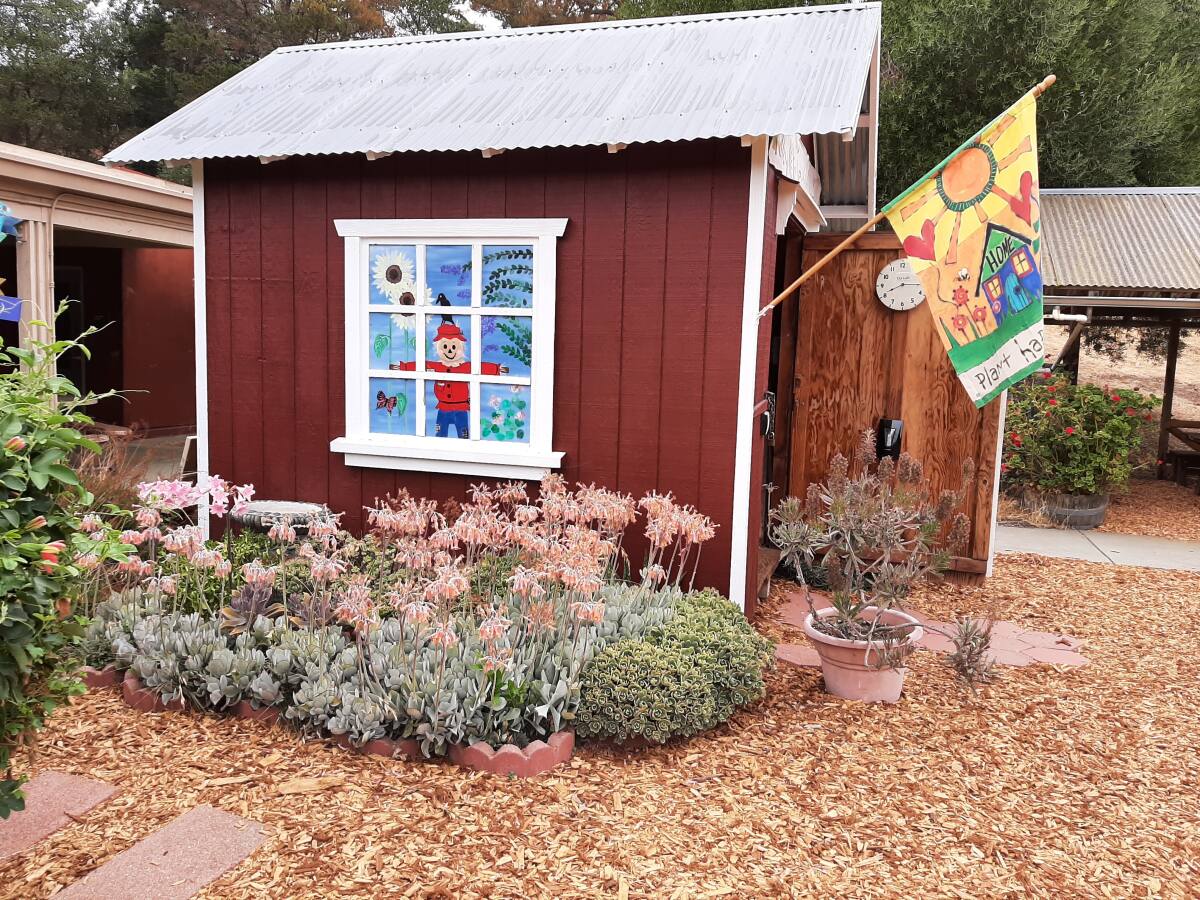 Twenty years ago, the principal of Valley Vista Primary School, Maureen Vieth, came up with the idea of â€‹â€‹creating educational gardens in the school. In June 2001, parents, teachers and students began mulching an area of â€‹â€‹grass between the classrooms for the garden. In the fall, they also built an educational space in the garden. Later, when she retired, the garden was dedicated to her.

Today, Valley Vista has two gardens: a main garden and a smaller garden near the greenhouse.

â€œThe Life Lab program was originally started in Santa Cruz, near the school where my husband, Bob Vieth, was first principal,â€ Maureen Vieth said via email. â€œI saw the wonders of the garden and its impact on children and realized it was something I wanted to achieve in the schools where I was also teaching. When I arrived at Valley Vista School there were a lot of parents eager to get involved and help make the garden a reality.

Today, Kathy Chambers and Mike Pesutich teach gardening classes for eight weeks in the spring and fall. Each class, from Transitional Kindergarten to Grade 6, has a gardening class once a week where they learn a gardening class in the outdoor classroom and tasks, projects or activities to do in the classroom. garden.

Maintaining a garden is no easy task, and Valley Vista School has an army of young gardeners working there.

â€œElementary students do most of the planting, weeding and cleaning in the main garden. Higher level students do most of the maintenance in both gardens. Their tasks include filling the planters with soil, moving the bark, pruning, removing dead plants, raking, weeding and maintaining, â€explained garden coordinator Kathy Chambers. â€œWe also have parent volunteers who help supervise students working in small groups. “

This fall, grade two students removed the sweet pea seeds from their pods, made seed packets, and brought them home to their families. The third-graders harvested gem glass corn, removed the kernels, dried them, and popped them to make popcorn. Sometimes students can observe changes in nature such as fungi, spittlebugs, aphids, ladybugs, and various insect eggs using magnifying glasses.

The garden has developed in more than one way since its creation.

Over the years, grants and funding from the Valley Vista PTA have enabled the school to purchase a greenhouse, drip system, more planters, fruit trees, and gardening equipment.

In fact, they are now growing a variety of plants in part thanks to Petaluma Seed Bank’s donation of a large number of unique seeds.

Currently, the garden has five varieties of tomatoes, Richmond green apple cucumbers, cucamelons (watermelon cucumbers), miniature white cucumbers, tiger melons, pineapple guava, lemon and lime trees, moon and star watermelon. The pumpkins were recently picked by the sixth graders who used them for the harvest party they organized for the elementary students.

Mother Nature and the school year calendar set a big part of the gardening calendar. Students plant later than the average gardener to ensure they can return to a lush garden in the fall.

So what happens to all of these products?

“We eat it!” laughed the principal Catina Haugen. â€œThe students appreciate the products and we share them with our community and our staff. When a table of products has come out in front of the school, it is only a matter of hours for everything to be picked up.

Retired Principal Vieth and current Principal Haugen agree that the Garden provides experiences to spark children’s curiosity and interest in our natural world. It promotes incidental learning and is a good flow for students to start thinking about larger global issues.

â€œWhen children have the opportunity to work with the land by cultivating it and watching it grow, they learn that they are making an impact and that what they do makes a difference,â€ said Vieth. “This knowledge alone can take a child this far and I always thought it was the gift from the garden.”