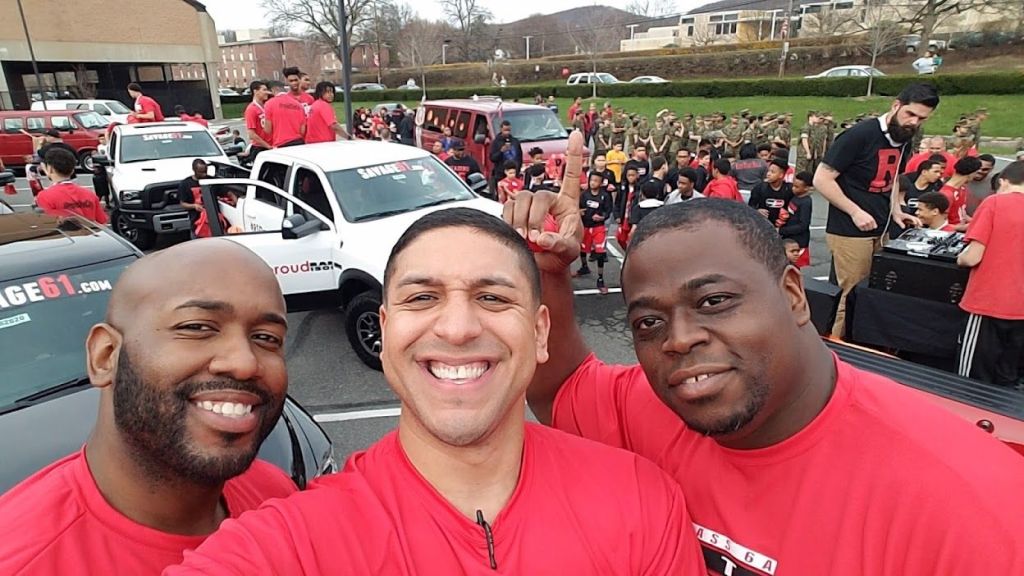 Perez, Flowers and Randall share a lifelong bond after coaching together at Reading High

Rick Perez and Matt Flowers have known each other for nearly 30 years, when they were kids in Muhlenberg.

They coached boys basketball at Reading High together for more than a decade and picked up Jai-T Randall, their “big brother,” along the way. The three worked together to guide the Red Knights to their first PIAA championship five years ago.

Now they are all head coaches, Flowers at Muhlenberg, Randall at Allentown Dieruff and Perez still at Reading. They will have a reunion of sorts on Saturday when they lead their teams in three consecutive games at the Geigle Classic.

“It will be very emotional,” Flowers said. “It shows what we have all worked to do. It shows all the work we have done. It shows the love we put in our children. It shows that we have learned a lot under Coach Perez and have grown. It’s like a statement that when you work hard you can spread your wings.

The showcase event begins at noon at the Geigle Complex with the Reading High girls playing Allentown Allen before five boys matches: Allen vs. Lower Merion at 1:30am, McCaskey vs. Hazleton at 3am, Dieruff vs. Central Dauphin East at 4:30am, Muhlenberg vs. Susquehanna Township at 6 and Reading High v Archbishop Wood at 7:30 in a rematch of the 2021 PIAA Class 6A title match won by the Red Knights.

“Why shouldn’t we be in this situation,” said Randall, 44, “having a chance to come back to the Geigle, coach a different team but recognize that this will always be our home? There remains a legacy of hard work and the passion we had for the community, the children and each other.

Perez, 40, and Flowers, 38, first met at a basketball game at a park in Muhlenberg. Along with Rob Flowers, Matt’s older brother who is now Daniel Boone’s football coach, the three quickly formed a bond that Perez says remains unbreakable.

They and their families live a block apart in Muhlenberg. Rarely a day goes by that they don’t see each other.

“Spanky (Rob) lives two doors down from us and Tuc (Matt) lives around the corner from us,” Perez said. ” It is not by chance. Tuc and I work together (at River Rock Academy). It just happened like that.

“We will always be around each other. We were at the Tuc game the other day (in Muhlenberg). Spanky was on one side of the gym and I was on the other.

Perez, a Wilson graduate, was an assistant at Reading High for Richard Reyes and Tim Redding before being promoted to head coach for the 2011-12 season. His first hiring of staff was easy. He asked Flowers.

“You really can’t separate us,” Perez said. “If one of us does something, the other is not far away. There was no way I was going into this job without him.

Flowers had been a volunteer coach at Reading after graduating from Kutztown University, then two seasons as a JV coach at Muhlenberg before joining Perez.

Their brotherly relationship was tested in the early years, especially when Perez’s varsity team battled and defeated Flowers’ JV team. But then as now, Perez implicitly trusted Flowers, who was telling the truth regardless of the circumstances or the people he might have offended.

“He taught me that you can never push hard enough,” Perez said. “He didn’t just push the kids, he pushed us hard. It will push you to the brink. You have to trust him because you’re going to end up in a beautiful place.

Flowers first got involved in coaching when Perez and the late Brian Ellison asked him to help them with their AAU team. Since then, he doesn’t want to do anything else.

He said his task once he joined Perez with the Red Knights was to “lay the groundwork” for what the program was going to be and not rely on what it was. He was going to be more than a JV trainer.

“We were on the road a lot together,” Flowers said of him and Perez. “Our families were often together, but it was always him and me. A head coach always needs that security blanket. He could talk to me and cry on my shoulder. It’s emotional work.

“He needed me and I was there.”

Reading High, however, was not making enough progress in the eyes of many, including Perez. The Knights were 50-33 without a county or district title and finished their third season with three straight losses.

He wanted to hire an assistant with head coaching experience and had known Randall from when they coached JV, Perez at Reading and Randall at Pottstown. Randall, who had been the head coach for three unsuccessful seasons in Pottstown, brought a different personality to the Red Knights than Perez and Flowers.

“He slowed the pace for us,” Perez said. “Flowers and I are going millions of miles a minute. Jai-T was like, ‘Slow down. We’re missing things here. He really helped polish things up for us.

“I respected him so much and came to love him. He understood me and accepted me for who I am. He knew I was emotional. For Jai-T, finding his niche with us was incredible. We owe him a lot. He is our sage.

Perez and Randall faced each other several times during that first season, 2014-15, when Lonnie Walker IV was a sophomore. Randall told Perez to throw away his thick playbook and stop traveling to Philadelphia for summer games and non-league games.

“I didn’t mind taking responsibility from Rick so he could focus on a thing or two. He was so used to trying to do everything. I made the same mistakes when I was a head coach. Then he started to trust me more.

Reading High won the first of three consecutive Berks titles in Randall’s first season with the team. The following year (2015-16), the Knights captured the District 3 Class 4A title and reached the PIAA semi-finals before Allertice upset them in a match that served as motivation for the players and to coaches.

In the 2016-17 season, Walker led Reading High to a 30-3 record, the Berks title and that elusive state championship with a win over Pine-Richland in the Class 6A Finals.

“When that final buzzer went off at Giant Center, all we could do was hug each other,” Randall said. “All I could do was stay in one place and hold back my tears. We did an impossible thing. It took a lot of bumps and scars to get to this place.

Randall, an Albright College graduate, stayed on for three more seasons before taking Dieruff’s job in 2020. The Huskies went 6-9 last year and are 2-12 this season as he attempts to restore a program that has struggled for a very long time.

Flowers left after last season when Reading won the District 3 and PIAA championships, something he had been reluctant to do. He guided Muhlenberg to an 11-5 record in his first season.

“Every decision I made came from our foxhole,” Perez said. “Every accolade that people try to give me, cut it in half and give it to Matt Flowers. He’s everything to me and what we’ve done.

The three stay in close contact and talk or text almost every day. They share memories and friendships that they will have for the rest of their lives.

“You know how when you have a child, you’re forever tied to that person?” Randall said. “It’s the same feeling. We are forever linked.

Coaching by voice calls | The star