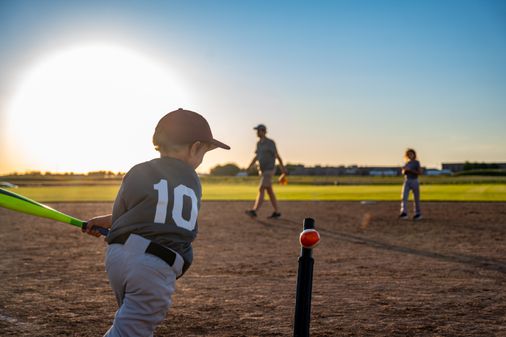 ‘Nothing about it makes sense’: After years of T-ball ‘coaching’, dad thinks it’s time to quit playing

I understand why the game exists. Parents want something planned for their children. They want it to be outside, and someone else in charge for an hour. I am happy to take on the role.

But nothing makes sense. Children want to run, jump, climb, roll. You know what a 6-year-old doesn’t want to do at 5:30? Stand still and wait for a bullet that will never come. Sorry again. Never is very long. This ball may come once a season, but just before it gets into that kid’s hands, five teammates will tackle it. The ensuing tears come from both the denied dream and the aching ribs. But to compensate for this, when the children are not on the field, we will give them a bat to swing on.

One problem with the game is the lack of fluidity. Youth football isn’t more exciting (to be honest, there are far fewer goals) but at least the kids can keep moving. Another problem: T-ball has tons of rules, many of which are conditional. Do it, but only if it happens. Granted, we keep things simple since no one comes out, and sure, sometimes we allow two people on a one-to-one basis, but the game requires you to keep a lot in mind.

And these children have already had a full day of school and listening to adults. All coaches mean well, but we’re doing what adults tend to do, which is to get in the way of fun, says Lawrence J. Cohen, psychologist and author of playful parenting.

The setup isn’t what kids are used to either. Kindergarten teachers will spend three months lining up, laying the groundwork in small steps, speaking softly and concisely throughout.

This is not the way of the T-ball. We have practice, followed by six games of “Now run. Run! No, not third. OK, now stop! Wait here. Come back, come back! It was a BALL FOUL. If the players could express it fully , their reaction would be, “You’re not teaching this the right way,” says Laura Dudley, associate clinical professor of applied psychology at Northeastern University.

But, is is there a good way? In the T-ball settings, not really. Beating is not the problem. It’s the only chance to run free, and I’m not one to stop them. One year was home runs for everyone. Not the stick is the problem. No kid ever said, “You know, I’m more of a glove man.” Children can only stand in a field for so long. As Dudley says, “Once you lose their attention, they’ll do things to get your attention.” From my field research, this includes wrestling, climbing fences, stealing hats, and wandering to pee behind a tree.

Over the years I’ve tried to liven things up, to keep the kids engaged. I had the defense in formation I where everyone lined up on the pitcher’s mound and had a chance to play, while I threw balls into the outfield for the kids to chase. Even though one of my players said to me, “I’m not a dog,” it worked until the league admonished me to stop.

Cohen says he would take it all apart and instead offer unstructured time, based on the “AnjiPlay” approach, developed in China and used in the United States in Madison, Wisconsin, where the job of adults is to bring the equipment and make sure no one bumps into traffic. Children discover pleasure, as they usually do when adults depart.

He knows that’s probably too much to ask. When something is unorganized, that is, official, parents get nervous. Children can lie down or sit sideways. They might also be arguing, something we like to stop with the ever-effective “Stop Arguing”. But children must learn to solve problems, to assert themselves, to be followers. Intervening is not a help. “We don’t chew their food,” Cohen says.

Having something organized isn’t so bad. It provides a precise time and place. The “Every Sunday morning at the park” invitation is sweet but too easy to give up. Dudley adds that at a minimum, the T-ball is a chance for kids to have fun with other kids.

Not sure about that. We could do better in the name of tiring them out with, I don’t know, kickball, obstacle course, tag, freeze tag, lawn bowling, mini-golf, capture the flag, treasure hunts, bubble-catching, jungle-gym- ace – pirate ship, and hunt stuff.

Bottom line: We already have the fields booked, and I don’t think any tears would flow if the T-ball was canceled forever. As long as you still have a shirt and there’s a pizza night at the end, my 7 year old son would be totally cool with the change.

Steve Calechman is a freelance writer on the North Shore. Send your comments to [email protected]