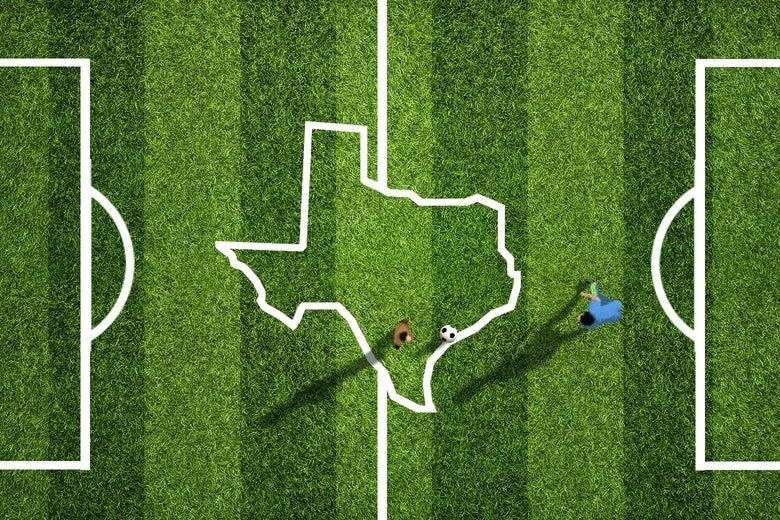 my crazy descent when I started coaching my son’s team.

At night I went through the team management manifesto of a Dutch football coaching legend from the 70s and studied the Brazilian training manuals from the 90s for the best possible lineups for five-a-side football. . I weighed the virtues of a dedicated sweeper and four attacking players who could operate freely against the safety of two players who remained in defense. The eight kids who showed up regularly for training all ran hard and tried to target their kicks. We had options.

I wasn’t devising tactics for a greenhouse travel league team or a particularly zealous ale league with former college players battling body decline in their thirties. The team in question was that of my 5 year old son, and the games were part of a Dallas YMCA sponsored mixed soccer league at his school.

The set-up was wonderfully inexpensive: an on-campus practice continued on Friday afternoon and Saturday games in a sun-bleached tundra next to a large college in North Texas.

Some of our players didn’t notice when our team scored, or when we conceded a goal.

I quickly learned that our players could be worried about how to put on a fluorescent yellow bib. Good clean tackles made us cry. Some of our players didn’t notice when our team scored or when we conceded a goal. It was bird migration season, so reporting a large crowd of blackbirds perched in the trees was sometimes more interesting than kicking the ball.

My 5 year old always went to play football. Her mother is an excellent footballer; I was a deeply mediocre player but I remain an obsessive. My son’s nanny is a strong supporter of Tigres UANL in Mexico and has dressed my two children in full Tigers kits. My son turned 2 in the summer of 2018, and he and I woke up together to the first World Cup games in the kitchen. I have valuable videos of my son while in diapers, standing and clapping for various national anthems.

For the first workouts my role was exclusively as a daddy: I â€‹â€‹picked up my son from school, performed the snack and the outfit change, showed him how to roll his beloved high socks on his shin guards (he prefers to train in European uniform; Celta Vigo in baby blue and Arsenal in red are his favorites), took him to the pitch, told him I loved him and stood ready with water. Sometimes I would pass the ball with my son and all the other kids there before falling back on the sidelines to brew the water and the praise.

Then our head coach had a conflict a week. We had an assistant coach who collapsed and seemed determined to teach kids the worst and least fun ways to play: a crowd attack around the ball paired ferrets with a disease defense that produced nothing but scrums. small hesitant kicks and dust.

So I intervened. The practice was easy. I brought extra balls. I had cones and downloaded a few U-6 drills and I remembered what I could of my own time indiscriminately in the New England AYSO leagues. When the coach was late I would help the team warm up and do exercises until he showed up.

Soon I co-coached the team, designed workouts, laid out the cones, and helped a 5-year-old turn her foot to use her instep to pass the ball, then rushed to 15 feet to help a child receive this pass. My son was delighted. He called me â€œCoach Dadâ€ and laughed to himself.

Anyone who has worked with young children knows how pure it can be – children laugh. They shout their friend’s name as they pass the ball to them. You announce a water break and they run over to the sideline where someone who loves them has a water bottle ready for them.

The games were different. The litter was the appropriate Texas size. Our league had public, private, and parochial school teams: from a public elementary school off the National Highway to a sprawling, lucre-laden day school where the Dallas Cowboys owner named a field after him. and his wife. The attendance at the matches was high. Extended families have appeared. Older siblings and cousins â€‹â€‹in their own uniforms for their own sports watched their younger siblings tackle a soccer ball before the family went to their own games.

The intensity of sports for young people in Texas requires no introduction. The stadiums of high schools that can accommodate 10,000 are commonplace. The strongest and most comprehensive piece of infrastructure in the state of Texas is the organization in charge of primary and secondary school competitions, from referees to rankings through championships in all areas, from fanfare to football through one-act plays and meat inspection. Even high school and junior college football programs boast myths about Texas and being young and lost regional legends. There was a popular TV show that dealt with these things. You may have heard of it.

Perhaps the best example I have has his: My son was a really big baby when we first moved to Dallas. Once, as I was walking him in his stroller through the Dallas Farmers Market, a stranger walked past us, smiled, touched my son’s big chubby knee and said “linebacker!” To me as a blessing.

So while football in Texas is not good football – and even though I imagine myself being separated from the patriarchal, cheeky, and patriarchal families of volunteer coaches – I have joined the same vast biome. And it did something to me. My eternally bookish penchants for football, my own failures as a young player, my vast experiences in teaching, the decades of witnessing and studying the sport I desperately wanted to be good at but never would – n weren’t these the seeds of a future coach?

In our league, the coaches stood on the pitch like a conductor. Our job was ostensibly to encourage the reluctant, to remind the selfish to share – every youth football team will have a ball hog determined to dribble aimlessly and confidently until the end of the days – and to make sure that everything the world backs down when the other team has a goal kick. But inevitably, as you offer encouragement and reminders (on corners: “Apply it from the corner flag to the goal! You get it! Take your time!”) To your own team, you interact with them. other parent trainers on the estate. You chat during half-time. The vibes can be weird: more than once I have received gibberish from a guy with a Rolex Daytona about how the two groups of kids “have to be more aggressive” in a sleepy late game. afternoon for 4-year-olds. It struck me: I was also there to manage these guys.

Our team won their first matches convincingly. My son and another teammate with football experience both plowed the midfield, scooped the ball, passed everyone and kicked the ball into the net. Parents were applauding and children screaming: all that mattered was that they scored.

I started wearing a Tilly hat with a curled up side like the gamekeeper in jurassic park.

Watching my son’s team play up close, I felt a tension: I wanted them to have fun first. And yes, I wanted them to win. But I wanted them to learn, to try new things. Parents are working hard to make these practices and children are brave to be here: let’s make sense of these practices. Allow me to deploy my literary knowledge about football. I was determined that the children would try to pass to each other and learn when to fall back into defensive positions. I started to mix the Brazilian five-a-side games I talked about with simple chaotic classics like having kids shoot the ball at me while I was running and selling like Ric Flair when I got hit. As Dutch training genius Rinus Michels wrote, â€œevery training session is a form of communicationâ€.

I felt special pride when our team beat and surpassed teams coached by adults, violating what I considered fair play: teams made up of all boys; teams that left their best players for the entire game and hid their shyest, smallest and less experienced players on the bench. My loathing for some of the other parent-coaches turned into action. I taught our team how to lead the rock-solid defense and Inter Milan’s curled counterattack from JosÃ© Mourinho against better teams – and they did. I had everyone switch positions in total Ajax football style against weaker teams and they loved it. We started to receive compliments from the opposing coaches and parents of the team. I ordered more Brazilian training manuals. We devoured donut holes at halftime. I started wearing a Tilly hat with a curled up side like the gamekeeper in jurassic park (each coach needs a signature). A stranger put her hands on my shoulders and congratulated me on having a “real football stallion” for a son. Once, after we rubbed a team, the opposing coach – visor, golf shirt, dress shorts – shook his head in awe at the final whistle and congratulated me and my co-coach on our success as if we were a bunch of old hammy veteran SEC coaches. I couldn’t deny the pride I felt. These were games where some players still needed diapers at night.

Now that the season is over, I think I’ve learned something. Youth coaching, when done well, is the chance to create a space where a child can change. Whatever my own path to coaching, I – the coach, the guide, the adult with their own personal stories and motivations – shouldn’t matter too much. They are, as they say, children. In the last game of the season, the shyest and most selfless player on our team decided to rush into midfield, win the ball and dribble towards goal. I gasped and clapped as if Garrincha’s spirit had materialized on that patch of scrub grass in Texas. She missed her shot on goal, but when she turned around she was smiling and her mother, grandmother and the rest of us were cheering her like true believers.