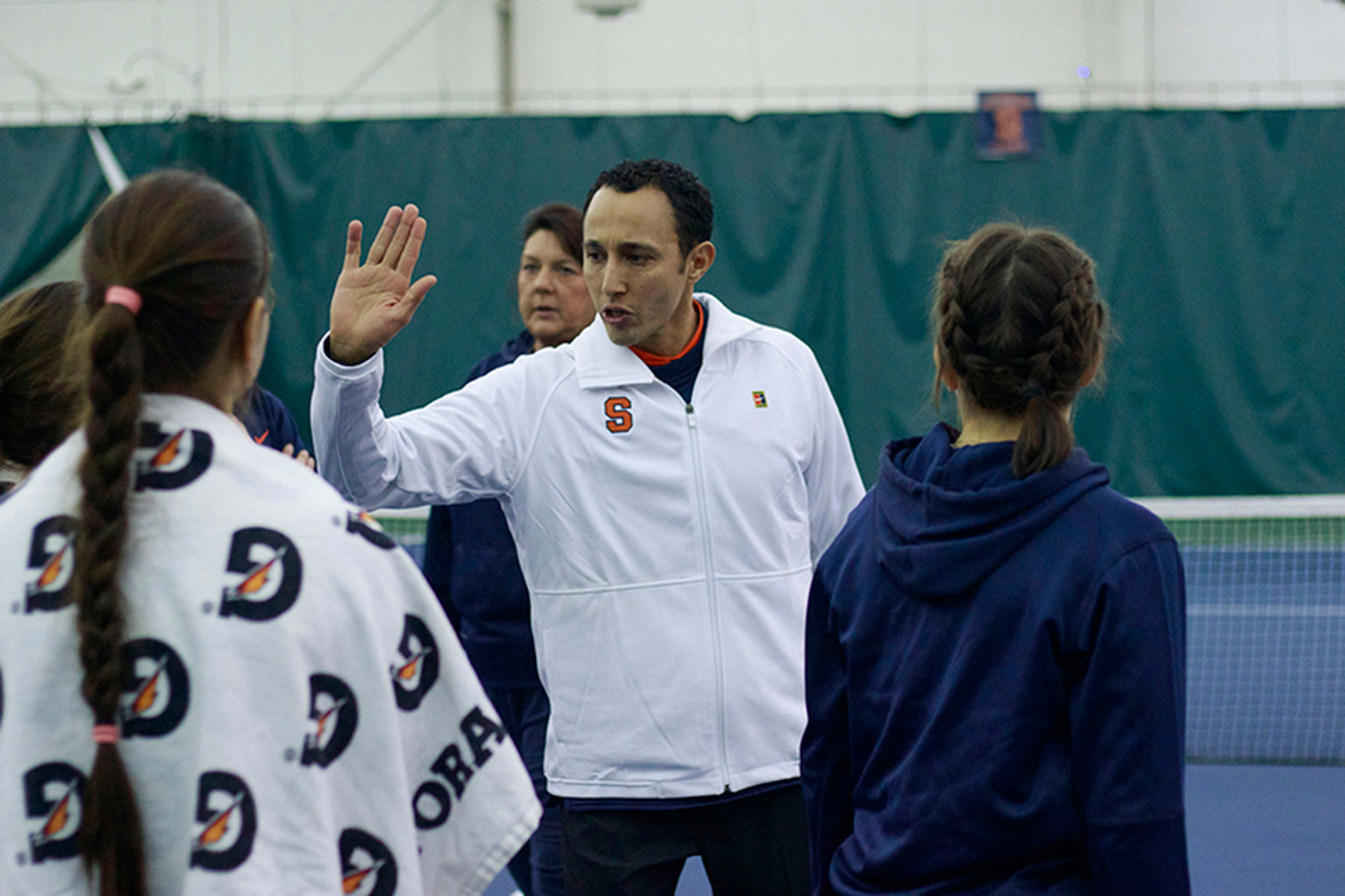 Get the latest news from Syracuse delivered straight to your inbox. Subscribe to our sports newsletter here.

Head coach Younes Limam held his hands behind his back as rookie Miyuka Kimoto lost his opening set to Louisville’s Rhea Verma 6-2 in singles match No. 2 on April 1.

As Kimoto walked dejectedly to the bench, Limam put his hand on his shoulder and gave him a few words of encouragement. His gaze was stern, but his tone was soft. Limam continued to stand stoically as Kimoto opened the second set with a thunderous shot to his opponent’s right side.

Kimoto won the second set in a close contest, and in the third and final set she came up big early, eventually taking the win. Throughout Kimoto’s comeback, Limam stayed by his side, occasionally turning his head to check on his other players. Whenever he noticed Kimoto tilting her head down or showing the slightest bit of frustration, Limam was quick to support her, motivating Kimoto to perform at the level she was capable of.

The end of this year’s regular season marks Limam’s eighth season at Syracuse. After his playing career at Drury University, he bounced back for a few years before getting an assistant coaching job at Rice University in 2009. After several successful seasons in Houston, including a surprise run at the NCAA Tournament Sweet 16, Limam has found his home with the Orange.

Limam’s relationship with tennis began in his hometown, Mohammedia, Morocco, where he was a promising junior tennis player in the Moroccan national team. In his late teens, Limam was approached by Drury University head coach and fellow Moroccan Amine Boustani. Limam was one of the first Moroccans he recruited because of their proximity, Boustani said.

“He lived about three or four hundred meters from my house where I grew up,” Boustani said. “His father worked for the same company as my father. … I knew Younes pretty well.

After arriving at Drury in 2000, Limam played a major role in transforming the Panthers program into a Division II powerhouse. Limam played at Drury for four years and produced an impressive 87-17 singles record. Boustani said he was amazed at Limam’s ability to finish his matches easily.

“We called it ‘Flipper’,” joked Boustani. “He always did such a good job of winning his games quickly, so when he changed sides after winning a game, he took care of business by flipping the scorecards all the time.”

‘Flipper’ ended his playing career with the second-most wins in Drury’s history, but Boustani said he was always impressed with the way Limam performed.

While Limam was in Houston, Schmidt said his positivity and tireless work ethic played a big part in the Owls’ success from 2010 to 2014.

“The college season has so many ups and downs, but he’s always been able to put a positive spin on things in a practice or a game,” Schmidt said.

In 2012, after winning the Texas Area Intercollegiate Tennis Association Assistant Coach of the Year a year earlier, Limam was an integral part of a Rice team that made a surprise run at the Sweet 16 in the NCAA Tournament. After losing the Conference Finals at home, the Owls received a general offer and traveled to the University of Mississippi for their first tournament game. At Ole Miss, they upset the University of Illinois in the first round before beating the hosts.

This year, the Syracuse team consists of international students only and includes players from five different countries. Kimoto, one of two Japanese players Limam recently signed, said he took the time to travel halfway around the world to his small town of Oita to offer her a spot on the roster.

During his tenure at Syracuse, Limam earned four NCAA Tournament berths with the Orange and was named ITA Northeast Region Coach of the Year in 2019. He helped Syracuse win its all first NCAA Tournament victory in 2016 and developed six All-ACC team members.

“He hasn’t built a one-year-old wonder. He built a tennis powerhouse in a tough conference with a team that when he took over was bottom of the conference,” Schmidt said.

Syracuse’s final regular season game was on Sunday, and it scored a big win over No. 35 Florida State. Limam and the Orange will now plan a trip to Rome, Georgia for the tournament. the ACC, hoping to add even more success to the program.

“I know him. He’s not finished,” Boustani said. “Eventually he’s going to find a way to get to the top.”