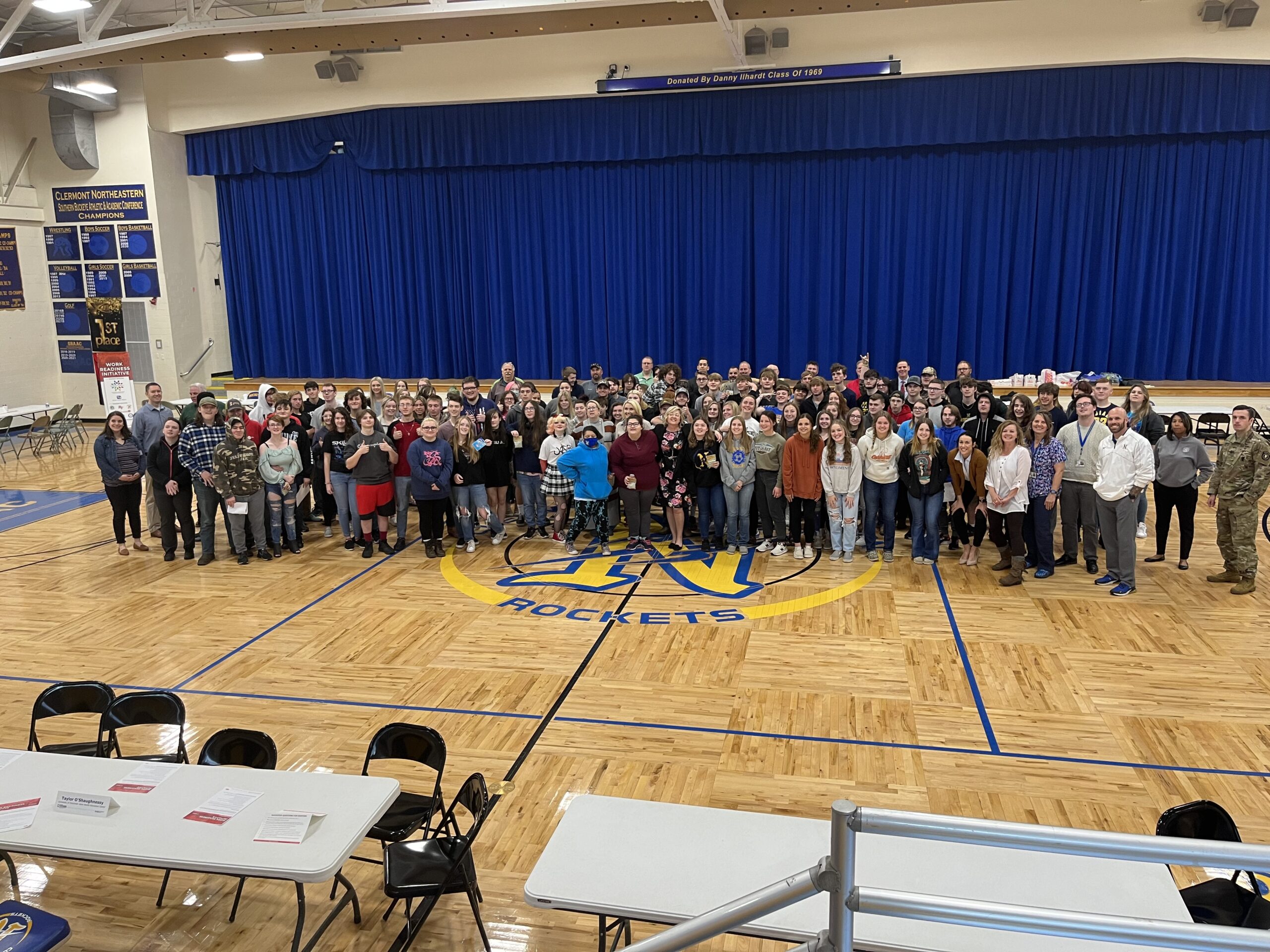 Juniors and seniors at Clermont Northeastern High School may not yet know what they want to do after high school, but they were able to discover 22 jobs in two hours earlier this month.

The Clermont Chamber of Commerce conducted one of its high school speed mentorship programs on April 14 — one of six the Chamber is running across the county, and the first at CNE since 2020. Tables were installed around the perimeter of the basketball court inside the high school gymnasium; students in groups of four or more spent five to six minutes at each table before moving clockwise to the next.

Representatives from businesses, both within Clermont County and beyond, spoke about their lives and careers, and, just as importantly, listened. There was even a “cheat sheet” at each table, with a list of questions students were encouraged to ask, including “What do you like/dislike about your job?” “When you were in high school, what kind of job did you think you wanted?” “What is one thing you would do differently in high school? “What mistakes did you make in your work and what was the result?” »

The wording of the questions was flexible; the value of incalculable conversations. The theme was consistent: where you are now is not where you will be in 10 years, five years or even a year. The path will change, but you must take the first steps.

“The job you start with outside of high school or college won’t be your last. You will always be redefining and redeveloping yourself. So that’s okay,” Robb Lohr said. He is Executive Director of Business Development at Lion + Panda, a West Chester Township digital marketing and web development firm.

“The days of having to work 35 and get a gold watch are over, like my dad. Keep growing and always look for opportunities to improve your network,” Lohr said.

He also offered advice that would win a student a gift card at the end of the morning – “If you’re the smartest in the room, you’re in the wrong room” – meaning, don’t stay in your comfort zone.

Faculty member Steve Thompson served as the school’s liaison with the chamber. He agreed that it’s unrealistic to expect someone at 18 to know what they want to do with their life, but it’s not too early to push students, “but at least have a pathway to guide you where you might want to go,” he said.

The companies represented were chosen by the chamber based on Thompson’s recommendations, according to the House’s director of government and head of its workforce readiness initiative, Andrew McAfee. He and director of development Heather Frye spearheaded the program, as they did at high schools in Batavia, Goshen, Loveland and Williamsburg, with another to come in Bethel-Tate. “CNE is going to be very different from Loveland, so we’re trying to diversify it as much as possible,” McAfee said.

McAfee graduated from Glen Este High School in 2009. This is his first year participating in “on-the-job” rapid mentoring programs. As school administrators, faculty and students navigate the return to “normal,” the Chamber is trying to find its footing and help the process along, while helping members and businesses find talent.

“That was, I think, the biggest challenge. We try not to be pushy or anything but to do events like this where the request is pretty simple all we need is a room just for these students to be exposed to these different careers “, did he declare.

“When the kids can be in person, however much time they spend doing almost everything practically now, whether it’s hobbies, learning, job hunting, shopping or whatever, that’s fine. for them to be able to actually understand that some things involve standing in front of another person and talking with them,” Plummer said.

“When I was in high school, I had no idea what I wanted to do with my life. Some people find something they love to do, and they do it all their life. Other people are 12, 15

different jobs during their adult life. And either is OK, as long as you’re able to take care of yourself and pay your bills. And you can smile at the end of the day. It’s OK,” he said.

Speed ​​Mentoring was the second program this spring at CNE designed to help students; the school held a job fair for seniors on March 22. Ohio Means Jobs was also a partner of this event. Seventeen companies participated. Both align with the CNE’s stated goal for its upper classes – for students to go on to college, work full-time jobs, or enlist in the military.

These companies participated in the Speed ​​Mentoring Program at Clermont Northeastern High School:

Patty Franco Coaching will be featured on Close Up Radio