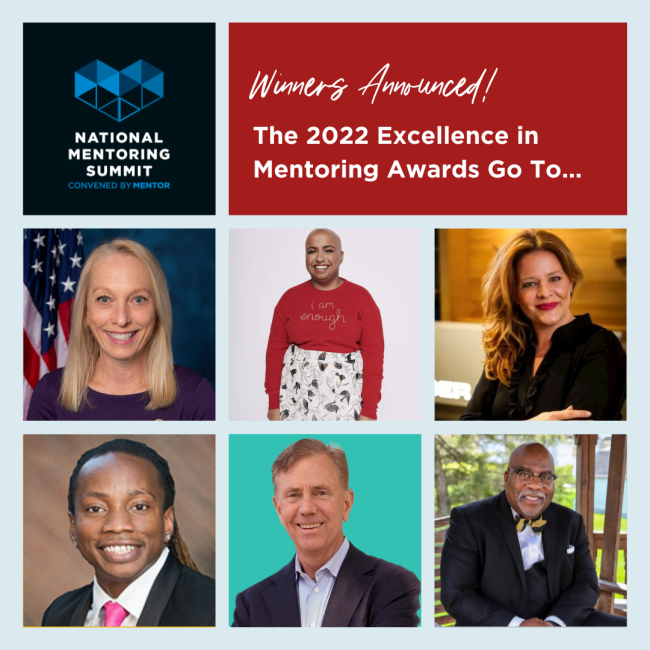 This year’s awards ceremony will take place on January 28 as part of the National Summit on Mentoring, bringing together more than 2,000 experts, practitioners, advocates and philanthropic partners to advance mentoring nationally. The Summit caps National Mentoring Month, celebrated annually in January to draw national attention to the value of mentorship in building meaningful and lasting relationships for youth and adults.

“The exceptional diversity of this year’s nominees and winners illustrates the many avenues of work to increase our collective well-being, our connections to each other, our stability and our opportunities,” said David Shapiro, CEO of MENTOR. “As we celebrate these examples of the mentorship movement, we also invite others to follow their lead in ensuring that all of our young people have the connections they need to thrive.”

AWARD FOR THE EXPLOITATION OF A LIFETIME – Daryle Cobb, Children’s Services of Franklin County (OH)

Daryle’s career has centered on the safety, permanency, and well-being of the most vulnerable youth in Franklin County, Ohio as a social worker, social worker, and director of the Simba Mentorship Program. Simba Mentoring is a mentorship program with culturally-focused and enriching programming that pairs Black boys involved in the child welfare system with Black male mentors. Daryle has also been a mentor with Big Brothers Big Sisters of Central Ohio for three mentees for over 25 years. Even after those matches officially ended, the mentees continued to look to Daryle for guidance and support and to celebrate successes that were sometimes only possible because he taught them to believe in themselves. .

The Lifetime Achievement Award finalists are:

The Corporate Youth Leadership Award is given to a young person who has participated in a corporate mentorship initiative and has demonstrated great leadership potential. This year’s winner is Sanah Jivani.

Sanah holds a dual degree from the University of Pennsylvania, where she earned a master’s degree in nonprofit leadership and a master’s degree in education, culture, and society. Currently, she works as a community engagement manager at Generation Hope, focusing on building community partnerships, recruiting mentors, and promoting college access.

Sanah has spent the past few years engaging and leading business mentoring initiatives, starting in high school, where she was selected as one of thirty young people across the country to be part of the State Farm Youth Advisory. Board. Through this opportunity, she worked with youth to allocate $5 million from State Farm’s philanthropic budget to organizations across the country. She was selected as a U.S. delegate for Girls20, the only platform for young women to influence G20 decisions, and recently participated in a corporate mentorship initiative at Bain & Company where she brought virtual mental health and anti-bullying. assemblies to students during the COVID-19 pandemic.

She is also the founder and CEO of a non-profit organization called The Love Your Natural Self Foundation, which focuses on empowering individuals through events, mentors, and hands-on sessions. She started this organization after losing all her hair to alopecia in seventh grade and struggling with bullying and low self-esteem. Today, his nonprofit organizes projects in 150 schools and 28 countries around the world, including International Self-Love Day. She has reached over 50,000 students through speaking engagements.

The Impactful Philanthropy Award highlights a foundation, company or individual philanthropist who has invested time and funds in mentoring initiatives across the country and in their own communities. This year’s winner is Stacey Ullrich, Head of Global Community Impact, Under Armor and Executive Director, Under Armor Foundation.

Prior to joining Under Armour, Stacey held positions at Constellation Energy, PW Feats, Earl Beckwith & Associates and the PGA TOUR. As part of her philanthropic efforts, she serves on the Cal Ripken Sr. Foundation, Center Club, iMentor, Project Pnuema, Ronald McDonald House Charities of Baltimore, Inc., and the Board of Trustees of the University Systems of Maryland Foundation.

Stacey has been a key figure in the mentorship movement in Baltimore. From supporting MENTOR MD|DC since its inception to supporting mentorship in a number of high schools and grassroots programs throughout Baltimore City, Stacey has made mentorship a cornerstone of her personal and professional life and led Under Armor to make mentoring a priority. Most recently, she supported the recruitment of mentors at Under Armor headquarters in support of a recently launched mentorship initiative for 9th graders at several Baltimore high schools. Additionally, she supports a number of internal mentoring initiatives at Under Armor designed to encourage and engage young professionals. Stacey has also been active in engaging the field of local youth development and mentorship programs by speaking at a number of donor panels and roundtables, to further raise awareness of the need fund local and community programs.

The finalists for the Impactful Philanthropy Award are:

The Public Elevation Award is given to an individual or organization that uses their influence and public platform to encourage, support and raise awareness of mentorship.

This year’s prize is awarded to Jamal Stroud, founder of Big Homie Lil Homie Mentoring, a mentorship program for young boys growing up without a father figure. At the national level, Jamal works as a mentor and outreach manager for Camp HOPE America, where he provides technical assistance to 40 different programs across the United States. Jamal has been recognized locally and nationally for the lasting impact he has had on over 10,000 young people, providing support and positive male role models to youth in South Carolina. Jamal’s personal experience growing up in the foster care system and living in six different homes by the age of six led him to the front lines of youth betterment and advocacy. Jamal was a guest on the Ellen Show and received numerous awards, including the prestigious Jefferson Prize.

The finalists for the Public Elevation Award are:

The Public Service Award is a dual honor – we celebrate individuals at the federal and state/local levels as government champions who support the mentoring mission. These public servants dedicate their knowledge, time and platforms to support mentorship and encourage adults to become mentors.

Rep. Scanlon has dedicated her career to serving the most vulnerable — first as a lawyer and now in Congress. She was first sworn into the United States House of Representatives in 2018 following a special election and currently represents Pennsylvania’s 5th congressional district. Representative Scanlon’s legislative priorities include the right to vote, access to justice, education, supporting economic growth in her region, gun safety and ending hunger. Rep. Scanlon is a mentor herself and chairs the Congressional Youth Mentoring Caucus, which works to advance support for the mentoring movement on Capitol Hill through events, networks and legislative action.

At the state level, this year’s Public Service Award goes to Governor Ned Lamont from Connecticut.

Governor Lamont has been a strong advocate for mentoring in his state. During COVID-19, he added mentorship as a volunteer opportunity to the StateUpCT portal, connecting nearly 200 additional mentors with young people in times of crisis. Additionally, he serves as Co-Chair of the Governor’s Prevention Partnership Board of Directors (a MENTOR Affiliate in Connecticut) and is an active participant in events that elevate mentorship across the state. Governor Lamont often speaks fondly of this time as a volunteer teacher at a high school in his state where he shared his knowledge of small business ownership and helped connect students with local internships.

Congratulations to all of our 2022 winners. The awards ceremony is free to the public and attendees can register here.

MENTOR is the unifying champion for expanding the quality and quantity of mentoring relationships across the United States. 30 years ago, MENTOR was created to expand opportunities for young people by creating a youth mentoring field and movement. The result: a more than 10-fold increase in the number of young people in structured mentoring relationships. Today, MENTOR is the leading resource and expert in the field of youth mentoring, representing a movement that meets young people everywhere they are – from schools to workplaces and beyond. MENTOR works with 24 local affiliates across the country. For more information, visit mentoring.org.

Discover additional media content and other ESG stories from MENTOR on 3blmedia.com

Non-compliance with training is not a Monell complaint