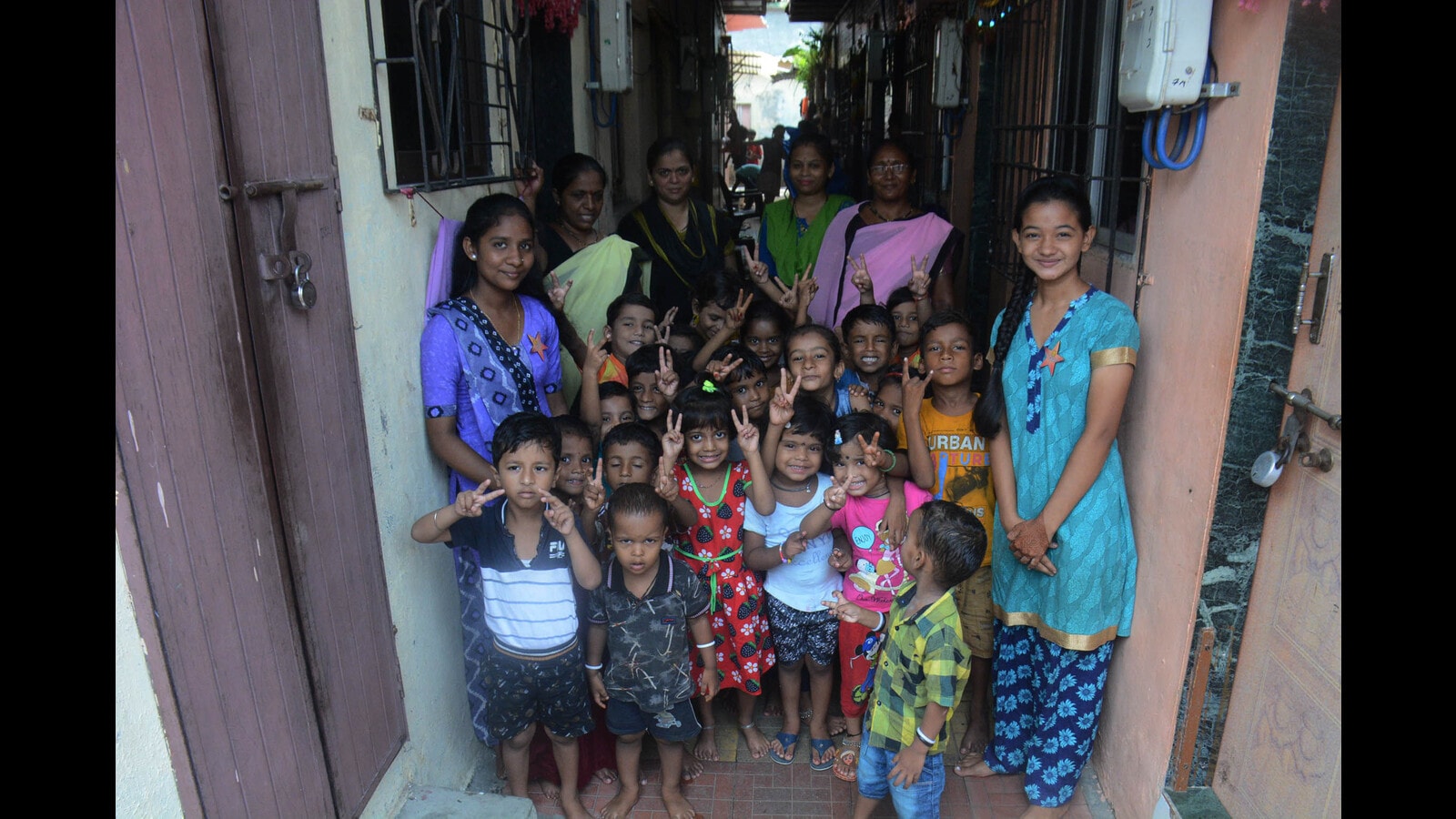 Akshada Sandeep Datir, 16, lives with her family of five in a small room in the Bhaskar Nagar neighborhood of Kalwa.

Despite poor financial conditions, she passed her class 10 with 90%. However, this was not enough for Akshada as she saw many children in her slums spending time in bad company instead of studying. Accompanied by eight of her schoolmates who are also gifted in studies, Akshada, who aspires to become an air hostess, has taken it upon herself to gather these children and impart to them a basic education and moral principles.

These girls were studying together. They completed their studies while helping their families earn a living. They did odd jobs like embroidery, dyeing clothes, tailoring, pottery and making rakhis. The Helping Kids initiative started by watching kids in their neighborhood do nothing and pick up bad habits since most of them haven’t been to school for over two years.

The initiative that started with these girls is now joined by 60 other girls from grades 7 to 12. They help students from kindergarten to grade 5 in the Kalwa slums. They do this for free and take the initiative to find students who need help regaining their interest in education.

An NGO, Pratham, which had a program of summer camps in the slums, started helping the girls after learning about their initiative.

Akshada said, “My parents always motivated me to work hard to pursue my dream of becoming a flight attendant. But, during the confinement, my friends and I have seen many parents work extra to support their families. Since they were unable to pay attention, most of the children got involved with slum elders and formed bad habits. Their language was also not suitable for a child. We completed our studies while helping our family earn a living and we also wanted the children to be responsible as well. »

Her school friend, Tejaswini Bane, who got 84% in class 10, said: “We wanted to teach these kids to improve their studies and catch up on the two-year curriculum they had missed. We didn’t know how to teach them because the students didn’t stay with us. At that time, the NGO Pratham, who heard about the initiative, approached us and sent us study materials like videos or games with which we could teach students. It became easy for us and the students because they liked the teaching methods. We used to start three times a week, but the kids have started to like our classes and now we teach them every day. »

The NGO which works in the central neighborhoods of Kalwa was looking for volunteers to organize summer camps for the children. Pratham’s Thane Program Coordinator Hemlata Sanane said: ‘We met these enthusiastic and dedicated girls in their work teaching children. We decided to look for other such girls and our team helps them with their questions and provides them with teaching aids. Despite our best efforts, all credit goes to those girls who selflessly take classes for neighborhood children. Our main goal was to fill the void of two years of education that these children lost and with the help of the girls, we are achieving this.

Kurtenbach: Steve Kerr performed a coaching masterpiece to win a fourth title for the Warriors