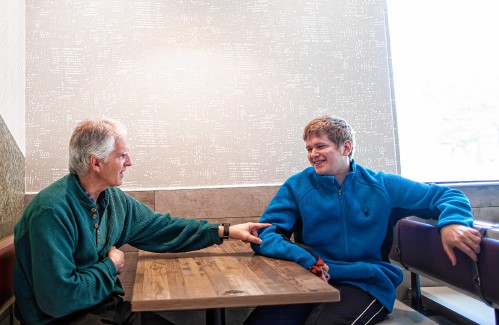 The first time Michael Franklin met Andy Julian, he was a little worried.

At 13, Franklin was wary of new people and didn’t know what to expect from the mentorship program he joined at his grandmother’s suggestion. Nor had he realized that Julian, a veterinarian, had nine dogs, four cats, six horses, goats, llamas, alpacas and sheep in his Canterbury home.

“I was like, ‘That’s a lot of animals,'” Franklin recalled with a laugh. “I was a bit nervous, especially with all the dogs barking. But I’m a really good dog person.

Julian and Franklin were paired as a mentor and mentee five years ago through the Friends Youth Mentorship Program, which matches Merrimack County children ages 6 to 17 with a mentor who can serve positive role model and advocate.

On a recent Thursday, Franklin, who is now 17 and a senior at Merrimack Valley High School, and Julian, who is 61, sat in a sunny corner of a McDonald’s on Fisherville Road in Penacook – the same spot where they met on their first day of mentoring. Julian, who was a first-time mentor when he was paired with Franklin, says he joined the program because he wanted to make a difference and offer a young person advice he didn’t have. maybe not at home. Franklin, who lives with his grandmother, said he joined the program because he didn’t have a father figure in his life.

“I wasn’t in the best place, but I didn’t want to tell anyone that I didn’t know everything, about how I felt and about my life,” Franklin said. “When I finally had a connection, he helped me.”

Over the past five years, Julian and Franklin have hiked, played disc golf and drank countless cups of coffee. Julian taught Franklin how to drive a car – including a manual transmission – and helped him get the practice hours he needed for his license. They did house repair projects, working on small houses to renovate. Franklin even completed his senior project observing at Pembroke Veterinary Hospital, Julian’s veterinary practice, where he observed animal exams, surgeries, and euthanasia.

Now Franklin says he considers Julian his father, and Julian – who has two daughters – refers to Franklin as the son he never had.

“Whenever I meet someone for the first time, I always hesitate about them, like I can’t trust them. But I slowly started to trust them and open up to them” Franklin said, “It’s pretty cool that I was his first mentee and he was my first mentor. It means a lot. It certainly wasn’t a mistake to match us.”

The need for mentors is high in the Concord area as the COVID-19 pandemic has impacted recruitment numbers and the organization’s outreach capabilities. Lily Wellington, director of volunteer programs at the Friends Program, says they currently have a waiting list of 80 children looking for mentors.

The program was originally established in 1975 as “junior-senior friends”, to provide role models for young people involved in the juvenile justice system or on the cusp of it. Today, the program has an average of 100 active mentor pairs per year. Many of the children involved are from new American families.

“Some 30 years later, we are now operating with the same theory, which is that if you provide a positive and caring role model invested in the development of an at-risk youth, you can make a big difference to those outcomes,” Wellington said. .

All mentors go through a selection process that includes an application, interview, home visit, background check and driving check, are matched with a child based on common interests or skills, and are asked to spend about one to three hours a week with their mentee.

Julian says one thing he’s learned is that he can be a mentor just by being himself, without having to do anything “spectacular”.

“Pick up the phone and call them. You don’t have to embark on a grand adventure,” Julian said. “Sometimes I pick him up, we have coffee and that’s about it, or walk the dogs or something.”

Franklin plans to graduate from high school, after which he hopes to study criminal justice at NHTI and Franklin Pierce University. He has big dreams of becoming a police officer who values ​​diversity, has the skills to defuse mental health crisis situations, and is not afraid to risk his life to help people in times of need.

“What motivates me is just knowing that I can make an impact,” Franklin said. “Even though I’m just one person, I can just spread positivity to everyone and they spread it and say, ‘This officer is a good officer. ”

The Friends program only requires a one-year committee from its participants, but many choose to go beyond that. Julian and Franklin both agree that they will have a lifelong friendship. They are already discussing plans to renovate more old houses in the future.

Those interested in signing up to become mentors can learn more at www.friendsprogram.org.

25 of our favorite camping books for kids