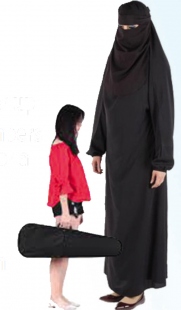 The child was nearly abducted from the halls of a reputable school in Mapusa, which reportedly had no security guards or CCTV to capture the incident.

MAPUSA: A quick-witted five-year-old girl managed to escape the clutches of a kidnapper who tried to abduct her from her school premises, remembering the training her parents gave her and asking for a “family access code”.

The attempt came to light on Friday after the child’s parents, a student at a reputable school in Mapusa, filed a complaint with Mapusa police claiming that an unidentified woman in a burka had attempted to kidnap their daughter.

However, as the school did not have a working CCTV camera at the entrance, the incident was not recorded, the child’s father complained. “There were no security personnel at the school gate either,” he said.

The parents said they dropped their daughter off at school around 2:20 p.m., for her violin lesson which starts at 2:30 p.m. As she was waiting for the previous session to end, she was approached by a woman in a burka, who spoke to her in Hindi. “The woman told her that I (her father) had an accident and she had come to pick her up,” the girl’s father told the Herald.

The child, in response, asked him for a family access code. This disturbed the woman, and the child took the opportunity to rush into the classroom, to her violin teacher. Another student’s parents informed her parents of the incident, and they rushed to pick her up.

The child had been trained by her parents not to talk to strangers, nor to trust them. “We taught our two children never to trust strangers. Even in an emergency, they know they will only be picked up by their parents, godfather or known neighbor or relative and never a stranger,” the father said.

The child is praised for her presence of mind in asking for a family code, when in reality such a code does not exist. “She realized very quickly that the lady was a kidnapper, because no one in our social or family circles speaks Hindi, and no one she knows wears a burka either,” the father said.

A Mapusa Police team led by PI Paresh Naik visited the school and inspected the site.

Asked about the incident, Mapusa MP Joshua D’Souza said: ‘I have already spoken to the Chief Minister and DySP about this, and assured law enforcement will investigate. the case and find out exactly what is going on with these kidnappings. attempts and the modus operandi.

“We also made a request to have a system similar to what they have in Panjim, where all major points in the city are under surveillance. It may take time, but we are also bringing it to Mapusa,” he said.

Responding to a question about the law and order situation in the city, the MP replied, “We can’t call it a breakdown of law and order because of a few incidents. As Goans we need to be more aware of our surroundings and alert to what is going on.