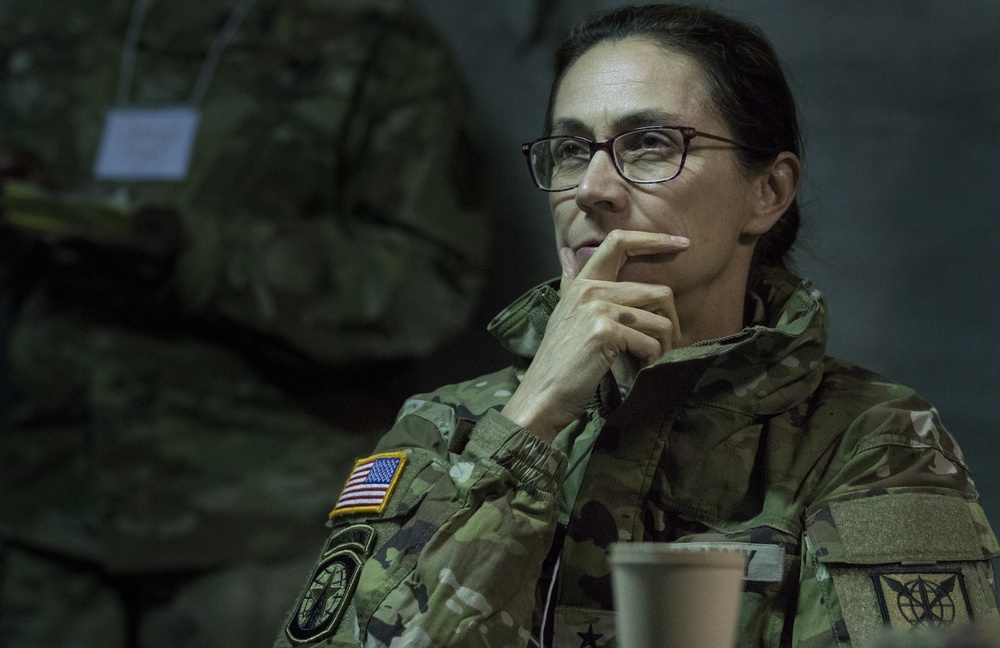 A child of hard work and ambition, Major General Garcia is the daughter of a Navy officer and an au pair-turned-travel agent, Lt. Col. (US Marine Corps, retired) Lou Garcia and Ms. Vivian Piaget, respectively. Lou Garcia entered the Marine Corps as a private, received his commission in Vietnam, and retired as a lieutenant colonel after 33 years of service. Vivian Piaget speaks three languages ​​fluently. While working as an au pair for an embassy family in Poland, she met Lou Garcia when he was a young Marine, stationed in Poland on embassy duty. Seeing the example of her parents as carriers of high standards, Marion Garcia knew that her calling was military service.

Young Marion Garcia entered the United States Military Academy at West Point in 1983, a school that first graduated women in 1980. When Garcia graduated from West Point in 1987, women weren’t were not allowed to engage in combat arms.

“As a female commissioned in 1987, the military police corps, which at the time was focused on combat support, was the closest thing to combat arms I could get,” Garcia said. “I wanted to be where the action was, so I asked for the military police and was lucky to get it.”

As a second lieutenant in Korea, Garcia was recognized as the best platoon leader within her battalion. She admitted “there was a shock” when her battalion commander selected her, a woman, as the best platoon leader to represent the military police in the Second Infantry Division’s Team Spirit exercise, an annual exercise combining the efforts of the Republic of Korea and the United States. State soldiers.

“I was part of a command structure that valued me as an individual and didn’t prejudge me based on superficial circumstances,” Garcia said. “The MP Corps was ahead of its time, and I always knew I was part of a team of professionals.”

Garcia considers active listening to be one of his leadership tools.

“The best ideas came from the soldiers,” Garcia said, recalling his days as a battalion commander running a detention center in Iraq. “All I had to do was listen, challenge staff to fill in the details and find resources for their ideas. Working with motivated and creative young people is a blessing.

“We are unique in our support role. In peacetime, the role of law enforcement is critical to good order and discipline across the force,” Garcia said, through a lens influenced by multinational, multi-deployment experience. “During the transition to hostilities, we ensure orderly movements. In times of war, we support the flow of logistics and manage enemy prisoners as well as civilian population flows, allowing combatants to move forward. Then we come back in phases.

Proud of her pro-MP bias, Garcia said, “We don’t need to be the main effort. We are the best effort.

“Shift. General Garcia is one of the most doctrinally competent military police officers the regiment has ever produced,” Hussey said. “She was a training management guru who was second to none in demanding training excellence from herself and her troops.”

Lt. Col. John Mullaney served as Deputy Operations Officer (G-3) in the 200th Military Police Command for three years and then, reporting directly to Maj. Gen. Garcia from 2015 to 2017, as Commander of the headquarters and headquarters company for another three years.

“Shift. General Garcia is a visionary leader who understood the need for military police to be prepared to conduct operations in austere conditions and with imperfect or non-functional technology,” Mullaney said. “She challenged subordinate leaders to live up to their full potential and be worthy to lead America’s sons and daughters into battle”

The way Major General (Retired) Garcia was able to serve as a leader of the military police soldiers and as a leader in the field of veterinary science is, at least in part, due to his passion for education. Education is a major foundation for his progression in his military and civilian career. Major General (Retired) Garcia received his Bachelor of Science in Engineering from the United States Military Academy at West Point in 1987; Doctor of Veterinary Medicine from Colorado State University in 1998; a master’s degree in military strategic studies from the Army War College in 2010; and an MSc in Preventive Veterinary Medicine, Epidemiology and Public Health from the Royal Veterinary College, University of London in 2015. Today, she is Director of Veterinary Services at Hybrid Turkeys.

“’Troops! For the troops! These two statements guide us daily,” Garcia said, explaining his inspiration for leadership. “They remind us of where we come from and why we exist.”

“‘Help! Protect! Defend!’ Three action verbs, all three selfless,” said Garcia, explaining his passion for service. “All three are focused on helping others. All three remind us of our duty to our fellow soldiers.