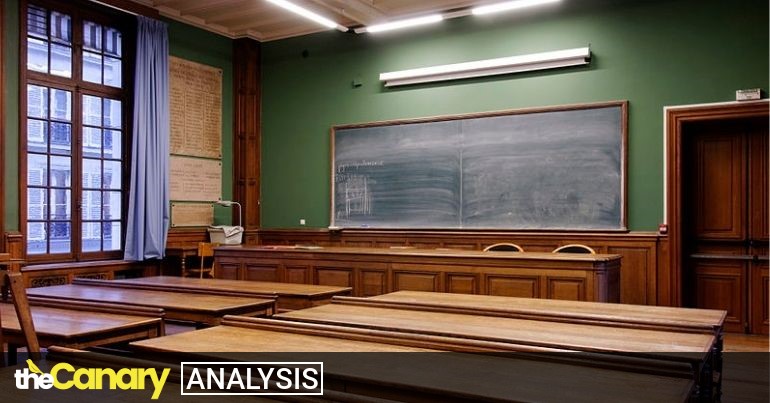 Conservatives love nothing more than to push their version of truth. Their latest effort to ensure their own version is told is the new direction on teaching political issues in schools. A 23 page document announced by Education Secretary Nadhim Zahawi was released on February 17 and sparked considerable debate.

Black Lives Matter (BLM), Israel/Palestine and the British Empire are among the issues highlighted in the document. It is therefore worth analyzing what the Conservatives are up to with this new decision. A companion blog on advice on the government’s education hub site states:

Everyone has their own opinions on particular topics and issues and teachers are no different, but it is important that teachers explain things to their students in an unbiased way. Teaching about political issues and differing views on them is an essential part of the curriculum, helping students form their own opinions and prepare them for future life.

That same Blog also acknowledges that:

The law states that teachers must not promote partisan political views and must provide a balanced overview of opposing viewpoints when political issues are taught.

And here is part of the problem. Laws already exist to ensure that educators are fair and balanced. Teachers and senior union officials immediately wondered why, if this is already the case, we need more advice. For example, Mary Bousted, co-secretary of the National Education Union told the press:

There is absolutely no need for new guidelines on how to deal appropriately with political and social matters…Very good guidelines already exist and are being followed across the country.

So are these just conservatives picking certain issues that they want to either exclude or push? Well, that case could certainly be made. Black Lives Matter (BLM) seems to be one of the topics that conservatives worry about. For example, he says anti-racism movements like BLM should be treated with caution:

Where schools wish to teach specific campaign organizations, such as some of those associated with the Black Lives Matter movement, they should be aware that this may cover partisan political views. These are views that go beyond the fundamental shared principle that racism is unacceptable, a view that schools should reinforce.

And the alternatives to oppressive and racialized policing seem out of place:

Examples of such partisan political views include advocating specific opinions about how government resources should be used to address social issues, including defunding the police.

Perhaps unsurprisingly, their advice indicates that documents on Israel’s occupation of Palestinian lands should be carefully explored, if not treated with some sort of “both sides” attitude. As if Israel/Palestine were a simple conflict of interests between two equal groups, rather than the oppression of one by the other. One scenario talks about using information from an outside organization that may be biased:

For example, the seemingly factual content includes partisan political opinions about the two historical events in the region, presented without additional context that would make it clear that they are disputed opinions. Several quotes from political figures have been inappropriately abbreviated to present an inaccurate version of what was actually said, and important contextual information about these quotes has been omitted.

It just seems to mean that teachers and schools should verify the information they use. Which, again, already seems to be a legal obligation. Although it can also be argued that requiring massive amounts of curator-approved context places a burden on individual teachers, already rushed and strapped for time.

The British Empire and imperialism also make an appearance. Although the document indicates that reformation and rebirth will probably not be a problem:

For more recent historical events, including those that are particularly contentious and contested, political issues may be presented to students. This includes many topics related to empire and imperialism, on which there are differing partisan political views, and which should be taught in a balanced manner.

Presenting hundreds of years of exploitation and occupation simply as a “partisan” issue surely minimizes the continued impacts of imperialism in the world.

It does not make sense. What child isn’t influenced by what their parents think? What do their friends think? Children do not come to school as blank slates. When ministers engage in culture wars, ask yourself what is the news they don’t want you to think about. https://t.co/aIdYG8LwpI

The conservative choice of subjects is revealing. Why Israel/Palestine, BLM and empire? Of all the questions, why are they being treated as if two equally legitimate sides deserve to be heard. The government’s decision to reinforce with advice what already appears to be the law is also significant. We have to wonder why they are doing this.

The NEU seems to think that it is not a question of applying the existing rules. And biased teaching does not seem to be a major problem in our schools. So maybe it’s the curators, not the teachers, who need a little soul-searching. Biased upbringing is not the issue here. However, biased policies of the culture war type seem to be a recurring problem.

Image selected via Wikimedia Commons/Marine Lan-Nguyen, cropped to 770 x 403, licensed via CC BY 25.

Henman’s coaching is a real hit at Chestnut Park Primary