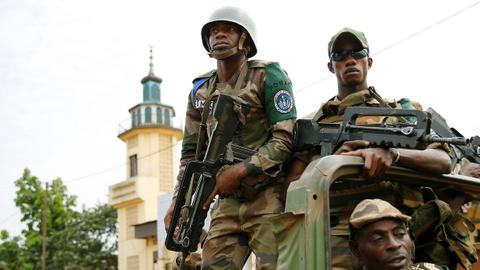 The announcement comes as soldiers trained by the EU Training Mission in the Central African Republic could be recruited by the Russian mercenary group Wagner.

The European Union has suspended its mission to train soldiers in the Central African Republic (CAR) for fear that it may be implicated in violations of international law by Russian mercenaries.

“We would need the guarantee that the soldiers trained by the EUTM are not employed by the mercenaries of Wagner,” a spokesperson for EUTM RCA told Reuters news agency on Wednesday.

“At the moment, we have no answer,” he said, adding that the EUTM will continue to advise the Central African forces.

The European Union Training Mission in the Central African Republic (EUTM RCA) said it has advised, educated and trained more than 3,400 members of the Central African forces since 2016 as they fight to stabilize a country facing multiple rebel insurgencies .

READ MORE:
West and Central Africa has the largest number of child soldiers in the world

Its work was complicated by the presence of hundreds of Russian agents, many of them from the Russian private military contractor Wagner Group, who arrived in 2018 and working in close coordination with the Central African army.

The EU imposed sanctions on Wagner on Monday, accusing him of carrying out covert operations on behalf of the Russian government.

Russian President Vladimir Putin has said that Wagner does not represent or get paid by the Russian state.

He also said private military contractors have the right to work anywhere in the world as long as they don’t break Russian law.

The EU has reacted with concern to reports that Wagner’s forces may also be deployed in Mali to help the government fight extremist militants linked to al-Qaeda and Daesh.

France, the former colonial power in CAR and Mali, has long-standing military ties across French-speaking Africa.

Analysts see Wagner’s deployments as part of a Russian strategy aimed in part at undermining them.

The United States said Wednesday it was “alarmed” by a possible deployment of Wagner in Mali.

Authorities in Mali have declined to comment specifically on information about Wagner, but say they have the right to work with any security partner they choose.