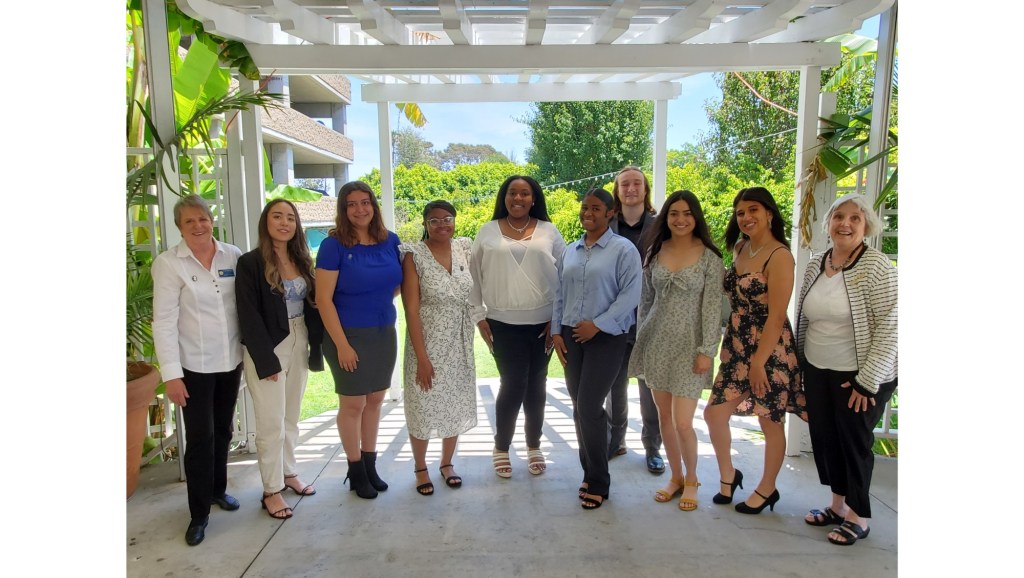 During a celebratory luncheon at The Grand earlier this month, Cameo, the Professional Auxiliary of the Long Beach Relief League, hosted eight graduates and their families and friends from the Mentorship and Enrichment Program .

“We are thrilled to honor our graduates,” exclaimed CAMEO President Debby Mather. “Over the past few years, we have seen our students’ confidence grow and they have impressed us with their strength and resilience during this difficult time.

“The Mentoring and Enrichment Program helps our students prepare for and thrive in college,” Mather added. “We are thrilled to announce that all graduates (Brenda Alcantara, Anahi Bedoy, Isabel Tejeda, Logan Pope Wendy Alcala, Leila Lee, Janai McNeil and Amya Hart) will be going to college this year.”

The program is designed to guide underserved Long Beach high school and community college students through one-on-one mentoring to help them identify and achieve their academic and career goals. In addition to mentorship, students participated in monthly enrichment workshops and cultural activities.

“Participating in events, internships and mentoring has helped our students grow into strong young adults who hold great promise for their future,” said Margaret Warren, President of Mentoring. “We are thrilled to celebrate their incredible accomplishments.”

Additional scholarships were awarded to Wendy Alacala, Isabel Tejeda, Brenda Alcantara, Logan Pope and Anahi Bedoy. Three former CAMEO students spoke over lunch about what it was like to be in the program: Alvin Avina, Nohelia Gavarrete and Sara Manangon gave inspiring talks. Manangon and Gavarrette are giving back and have also become mentors with CAMEO.

Students benefit from gracious donations from the community and the involvement of volunteer mentors. If you would like to become a mentor or donate, visit allb.org/cameo.

There was an enthusiastic crowd of 310 guests at the 45th Annual Long Beach Cancer League Gala on June 4. Held at the Museum of Latin American Art, the beautiful event was enhanced by a tour of the art museum, then it was cocktails in the ballroom followed by dinner, wine and the sunset program in the sculpture garden.

The event featured ‘stars’, which are people whose cancer stories are shared with the public. Honorees this year were: Cindy Gillis, Cynthia Howard, Rena and Todd Johnson (who also won the live draw), Cathy Kopy, Laura Lummer-Sigmon, Melva Miller, Carmen Perez, Jeannette and Louis Rampino, Darick Simpson and Jack Witherspoon. Former stars were also recognized. Overall, the event raised more than $250,000 to support the work of the American Cancer Society, which is dedicated to eliminating cancer and reducing cancer-related suffering through research, education, advocacy and services.

The event, at the end of May, raised nearly $25,000, with proceeds going to programs and services that directly benefit LBDN’s children and families.

Installation of the children’s charity league

The Old Ranch Country Club was the beautiful setting for the Children’s Benefit League installation meeting on June 1, where 2022 donations were distributed to representatives of various charities.

An early social time was planned so that the group could catch up.

Members appreciated the opportunity to chat with clinic representatives to see how they are doing, as they have been banned from visiting for much of the coronavirus pandemic.

It is hoped that visits will resume next year as clinic members and staff appreciate these important visits, which increase the scope of understanding the clinics provide to the underserved in the community. Members were pleased with the amount raised and looked forward to another successful year.

At another Children’s Benefit League event, new members hosted a Cinco de Mayo Long Beach harbor cruise and lunch at Gladstones. It was a glorious day in Long Beach, with sunshine and a gentle breeze carrying 30 women around the harbor and back to Gladstones for a hearty buffet lunch. Cherie de Gomez and Donna Luciene chaired the event. Funds were raised for the five clinics served by the league.

News of charity social events can be sent to Shirley Wild at [email protected] or by fax at 562-594-9468. Please include a contact phone number. Send high resolution jpeg photos, via email attachment, to [email protected] and include the name of the group and identification of individuals on the left. Call Shirley at 562-594-9468 for more information.