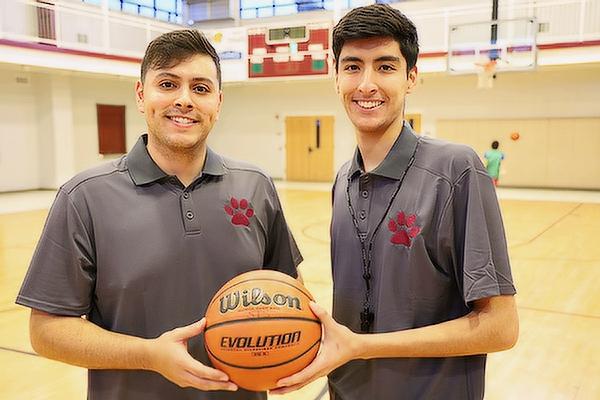 The coaches lacked experience, but had a lot of passion to teach the little brother’s team

One thing that sets parochial schools apart from all other educational institutions is the sense of family felt by all. And when there are siblings involved — and what Catholic school doesn’t have a few sets around — the bonds that form can never be broken.

That’s exactly what Fernando Alvarez got into when he volunteered to coach college basketball at St. Theresa School in Little Rock last season. Alvarez, a graduate of the school, has many fond memories of representing the Cougars.

“I played basketball and football from grade six to eight. I loved it,” Fernando said. “(Sport) is what we looked forward to as kids.”

When younger brother Diego started fifth grade last year, Alvarez, 27, who works for his family’s La Hacienda Mexican restaurant, saw a unique opportunity to share the field with his brother.

“I love being involved in school,” he said. “I am on the Diocesan Board of Education and have been connected through Catholic schools through that. When the opportunity to coach came up, I just thought it would be something I could do to contribute and have a good time.

Fernando, the eldest of five brothers, had plenty of enthusiasm but lacked experience, having never officially coached a youth team before. So he reached out to another of his siblings, Angel, for an extra pair of hands. Together they embarked on an adventure with 10 fifth-grade boys, most of whom are dribbling a basketball in an organized competition for the first time.

“We wanted it to be a lot of fun, just a lot of laughs at all the stupid mistakes we’ve all made,” Fernando said. “No one really knew what was going on. It was just a fun experience.

“And at the same time, it was hard because I know I have to teach them all these things. It was a bit overwhelming. But I was like, ‘You know what? We’re just going to take this step one step at a time, and I’m sure we’ll figure it out.

Looking at 11-year-old Diego, it’s clear his game has been sharpened by having older brothers. In fact, Alvarado’s basketball games are legendary, Fernando said. Despite the sibling rivalry, Diego said he was delighted to have his brothers on the sidelines.

“He seemed to enjoy it,” Fernando said. “When the opportunity (to coach) came up, he was the first to say to me, ‘You should be our coach.’ I was like, ‘You know what? Maybe I should.'”

On the face of it, the team had its share of growing pains, posting a 2-6 record. But that doesn’t tell the whole story. Many games were close competitions, and with each passing week the team grew more confident in their abilities, as did their rookie coaches.

“This season I’ve learned that every kid is different,” Fernando said. “They all respond to different forms of communication. Some like you to show them things, some learn verbally, some are more sensitive and don’t like being called into practice. Learning to treat each child for who they are personally is something that I grew up in a lot.

In the postseason tournament, the Cougars faced a team destined for the tournament finals and gave them everything they could handle. Although ultimately losing (by just five points), the team played exceptionally well, capped off by Diego nailing a 3-point field goal at the buzzer. It was a small win, but it ended the season on an exciting note.

“It was fun all year; everything went very well,” said Diego. “I will absolutely play next year.”

“Angel and I just wanted to help kids grow into young men,” Fernando said. “Through sport you can learn a lot about yourself, learn not to let go, not to give up on yourself. You are going to make mistakes; you just have to overcome them. Learning together as a team, we all grow together.

“That last game was the highlight of our season. It proved to the kids that you can never give up. You just have to do your best and fight until the end. »