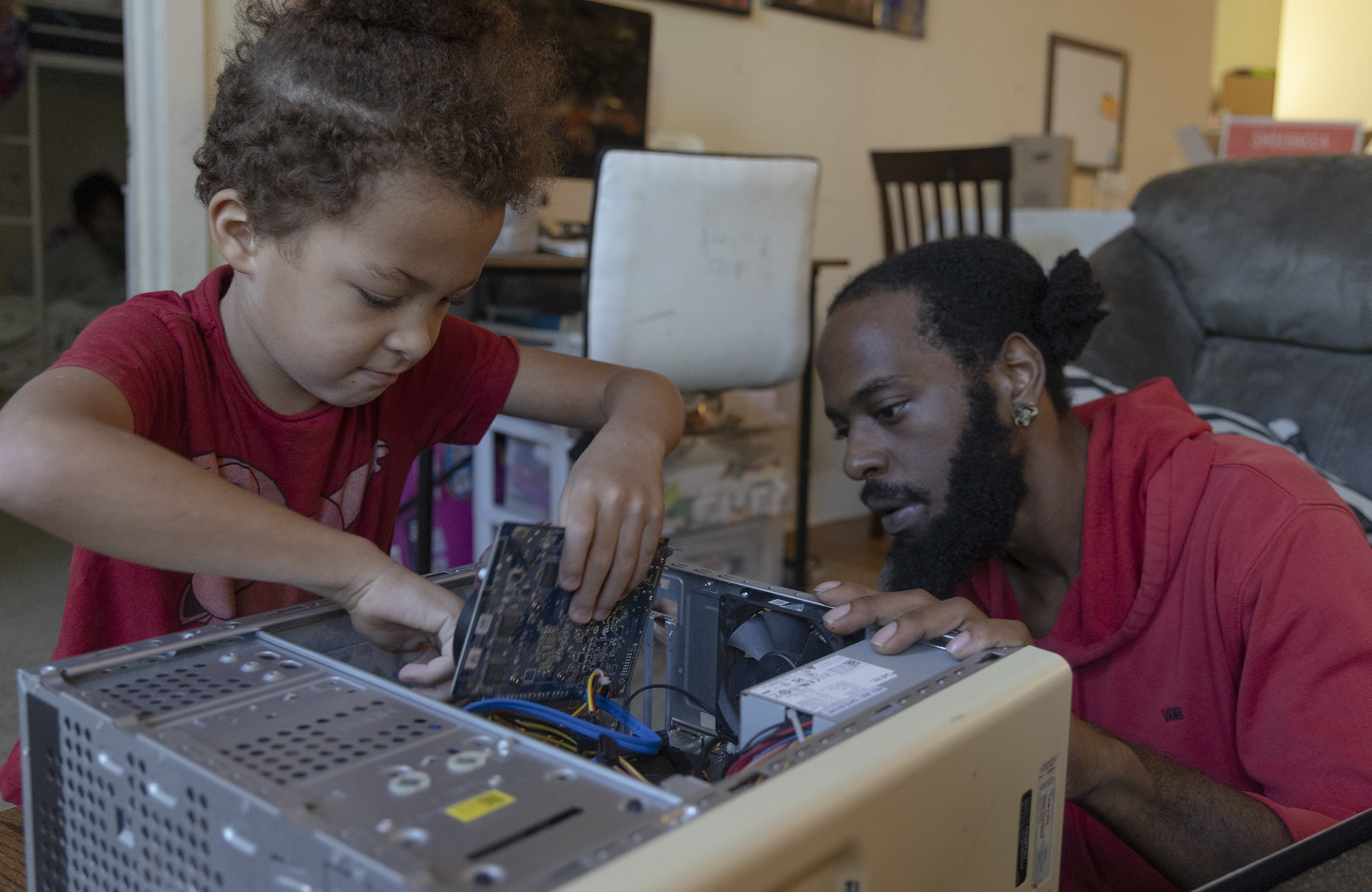 As a vocational training program comes to an end, SA Ready to Work accelerates

When Dyvontrae Johnson first heard about Train for Jobs SA, which pays residents while they undergo vocational training and education, he had a difficult decision to make.

A single father of two and threatened with deportation, Johnson had just been offered a decent contract to install fiber optic cables. But if he could get an information technology certification, maybe he could start working full time with health care benefits somewhere. Maybe he could climb the ranks and start saving money for his family.

“I know that [fiber job] is a bird in hand, but these two in the bush look really, really strong, ”Johnson, 31, told the San Antonio Report. He already knows a lot of computer basics from his previous jobs, but this certification would open more doors for him. “This piece of paper… will take me into the room with some people.”

He chose birds in the bush, starting a crash course online at Alamo Colleges District for CompTIA certification, one of the highest credentials for associate-level IT professionals, in October.

Johnson is among hundreds of students taking courses at Alamo colleges or with other career training partners under the $ 65 million Train for Jobs SA program, which closes to new applicants on Friday. The federally-funded program was created last year as part of the city’s plan to immediately help residents – and the local economy – recover amid the coronavirus pandemic.

The $ 200 million SA Ready to Work program, funded by a 1 / 8th of a cent sales tax, will take over early next year. City council is expected to approve contracts with vendors in mid-February and students could start classes as early as March, officials said. In the meantime, students will be placed on a Ready to Work waiting list.

There are two main differences between the two programs. Ready to Work will not provide students with allowances, up to $ 450 per week, as Train for Jobs does. And unlike Train for Jobs, the new program will have an income cap: people earning more than $ 32,000 per year (about $ 15 an hour) are not eligible.

But for many students, including Johnson, it was the allowance that prompted them to apply.

“This is such a rare opportunity that the pandemic allowed me not only to attend classes, but also to receive an allowance,” Gonzalez said. “It still amazes me a bit. ”

Before the pandemic, Gonzalez worked in customer service for TaskUs, a digital outsourcing company. He wanted to work in the company’s IT department but needed training, so he started classes at Bibliotech. When the pandemic hit, those classes stopped and he was put on leave. He moved in with his father, who had medical problems.

He works part-time with a landscaping company while taking courses. The accelerated pace and allowances suit him well, Gonzalez said.

“I don’t have huge bills,” he said. “I have my car insurance, I have my cell phone, then I have, for example, two credit cards that I pay off. And I’m good after that.

For the first two weeks, the students were not paid, but Gonzalez said he was briefed and prepared for it. “I have always thought of the allowance as a little extra income.”

But for Johnson, with growing rental debt and two dependent children, that two-week delay – which he said has shrunk to three – was a blow. Johnson had to find a daycare to work between class and homework.

He also said he missed the “fine print” that stipends would be “up to” $ 450 per week. He usually receives $ 360. This income has resulted in him being denied food stamp allowances, an issue his social worker is working on, he said.

“I had a plan six months in advance of what I was going to try to have my kids for the holidays,” Johnson said. He found the lessons easy, but the late payments meant “we’re too broke to celebrate anything.”

The stipends, paid through the agency where the student takes the lessons, are based on the hours spent in class and the time estimated by the instructor for homework, said Xavier Urrutia, acting vice-chancellor. economic development and workforce at Alamo Colleges. They get $ 15 an hour.

Urrutia said the district is working on creating a recognition form that explains the delay in stipends and other elements of the course. He’s also collecting feedback to see if he should give students options when it comes to the pace of the class.

A “key” lesson learned at the start of the Train for Jobs program is that it is worth asking students to carefully consider their course and career options, Urrutia said.

“Stop, breathe [and] look… where you see yourself in the future, ”he said. “We’ve seen a lot of people want to get into IT because they just thought IT was the place to go. “

Having no allowance under Ready to Work may dampen the interest of San Antonians who are unemployed or looking to leave low-paying jobs to enroll, said Mike Ramsey, director of the development department of the city ​​workforce. But the new program will provide up to $ 1,500 in emergency funding for rent and car repairs or other one-time costs.

“Our Ready to Work outsourcing agencies will be part of and add to this network,” he said. “The goal is to ensure that we are using the resources that are already available within our community, including the resources available from the City of San Antonio itself, which has a plethora of programs to help people who might find themselves in financial difficulty.

This includes assistance with rent and utilities, home repairs and child care.

“The biggest misconceptions people have [about Train for Jobs] is that the city does the training, the city does the case management [and] the city pays the allowances, ”Ramsey said. But in reality, “the city is only the financial backer” which contracts with providers like Alamo Colleges.

While Train for Jobs got off to a slow start in the summer of 2020 and was extended until 2021, Ready to Work will build on the enhanced workforce development ecosystem, Ramsey said.

“Train for Jobs was done very quickly – we were in the middle of a pandemic, we had to help people right now,” he said. “For Ready to Work, we have a commitment… to [dozens of employers] to support, hire and educate the Ready to Work program so that we can ensure that the training these [people] traverse is aligned with a job that will await them at the end of this program.

The objective of Train for Job was to place 10,000 interns in new, better paying jobs. By mid-December, more than 9,500 people had completed preliminary admission to the program and 4,433 were currently in training. Of those who graduated, 929 are looking for a job and 888 have found a job.

“There are still thousands of people waiting to start their classes,” Ramsey said. “These will last throughout 2022 and some even until 2023.… Train for Jobs will last for a while. “

Ready to Work aims to train and employ up to 40,000 people. Sales taxes for this program began to accumulate in May and will continue for a period of four and a half years. City officials negotiate contracts with third-party vendors to implement the program. A final plan is expected to be submitted to city council for a vote in February.

Another difference between the two workforce development programs is that four-year degrees are eligible under Ready to Work. Train for Jobs aimed for shorter programs.

“There is a huge segment of the population that has a college [education] but for some reason life happened and they failed, ”Ramsey said. “So these people will have the opportunity to complete this study program through the Ready to Work initiative. “

Johnson said he regrets taking the Train for Jobs program.

“I should have taken the [fiber] work, ”studied online alone and took the certification tests on his own, he said.

However, he plans to complete the course at Alamo Colleges, which ends in March.

“People voted with confidence that a bunch of people with money and costumes were coming and in fact really couldn’t care less about people like me,” Johnson said of the November 2020 election, when voters have overwhelmingly approved the sales tax for Ready to Work. “Here I am about to be potentially out of my home.”

Gonzalez acknowledges that some students in his cohort are struggling, but he’s generally happy with the program.

“Before that, some mornings I would wake up or go to bed and find myself with this kind of existential worry, like, ‘What am I going to do with myself?’ “, did he declare. “Now that I’m in these classes, I don’t feel it anymore. And I’m really, really grateful.